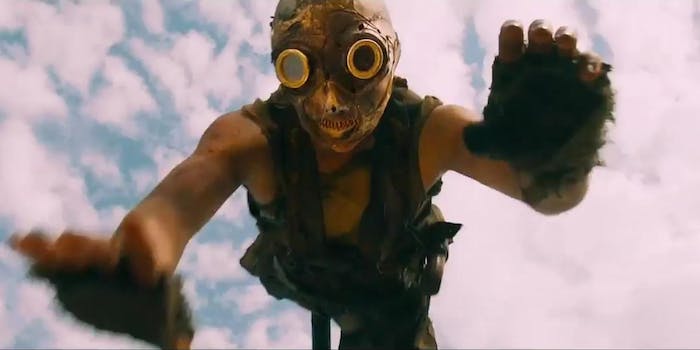 The latest ‘Mad Max’ trailer is the best one yet

If it was unclear that 'Fury Road' wasn't a reboot, this trailer should clear that up.

When Fury Road was announced back in 2003 without Mel Gibson’s name attached to it, fans were not very happy—the general consensus was “No Mel Gibson, no Mad Max.” Then news came that Fury Road was at least not going to be a dreaded reboot, which put fans’ worries a bit at ease.

Then the first trailer hit, and suddenly nobody cared who played Mad Max anymore. It was discovered en masse that Max isn’t about who plays Max—it’s about steampunk cars, oily explosions, weird and scary masks, and armor made out of scrap metal—and that trailer had all of that.

Now, the fourth trailer is looking at the Gibson-Hardy issue dead in the eyes, and letting audiences know that it’s truly not an issue at all. By sticking the two actors and four films side by side, it’s letting fans know that Max isn’t necessarily about a character (although that character is awesome), but more so about the world-building. And, oh boy, Fury Road has plenty of that.

This trailer also shows how at home Fury Road feels in the Mad Max library. Actors aside, this is definitely the same universe, and the latest installment looks like it might not only fit in with the rest of the films, but has the potential to be the best one yet.

Find out how Fury Road stacks up to the rest of the Max library on May 15. And if you’re not in the theater on that date, or a within a few days after it, we’re officially revoking your Film Fan Card.