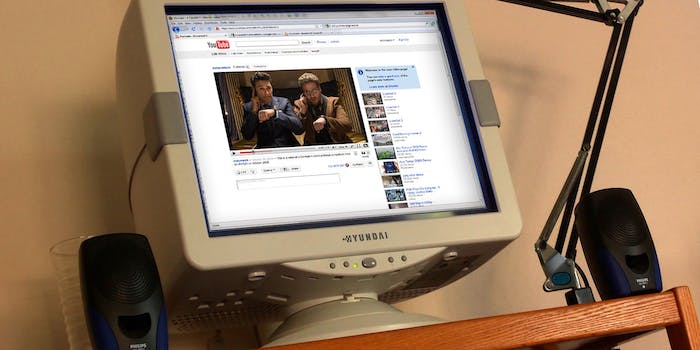 Photos via dno1967b/Flickr (CC BY 2.0) and The Interview | Remix by Fernando Alfonso III

Sony made big news on Wednesday by deciding not to release Seth Rogen and James Franco’s The Interview on Christmas day, after several theater chains dropped the film for fear of terror threats. But that didn’t stop a YouTube promo for the film from surfacing yesterday—with the Dec. 25 release date intact.

The 30-second promo announces that “this Christmas,” in “Franco and Rogen we trust,” and the video’s description pointed out that “only one movie has the whole world talking.”

Sony quickly pulled the video from its YouTube channel, but you can still find it elsewhere… for now.

Sure, this could have been a pre-scheduled mistake on the part of Sony’s marketing department, or it could have been another carefully constructed scene in this increasingly bizarre meta–movie. While Sony has still not announced alternate plans for release, you’ve got to expect that maybe, in the era of late-night leaks and album drops, The Interview will surface online somewhere.

After all, we apparently can’t stop talking about it.

Photos via dno1967b/Flickr (CC BY 2.0) and The Interview | Remix by Fernando Alfonso III