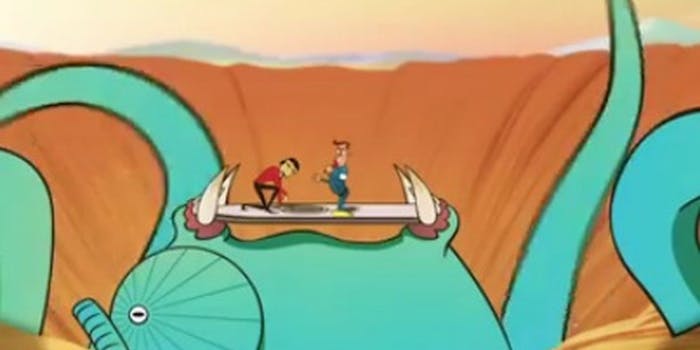 Writer Brett Snelgrove and animator Freek van Haagen hope their pilot episode is funny enough to reel in sponsors for a full series.

Murray and Hamilton are two marooned and bickering “starship crewmen” fighting “for their lives on a primordial world after their starship crash lands on the wrong planet!”

So far, writer Snelgrove and animator Van Haagen have produced a pilot, four shorts and an upcoming Facebook game for New Eden, and they’re hoping to drum up sponsorship for a full series. It could work, marketing-wise, although it doesn’t look like Snelgrove or Van Haagen are tapping into their established networks to promote the show.

As an animated sci-fi comedy show, New Eden is less of a novelty. Snelgrove described it as either South Park or Land of the Lost “meets Looney Tunes,” in a blog post, and while the humor is there, the writing is not.

The pilot draws heavily on Star Wars tropes, and the first uploaded short is a minute-long joke about a man getting raped in the butt by a large chicken-like creature. That said, it could do well on YouTube based on its general Internet appeal and accessibility.

Whatever flaws there may be in the writing, the animation in New Eden is absolutely stunning.

The creators haven’t announced a release date for the next  short, but they promise it will feature some “cool frick’n monsters!”