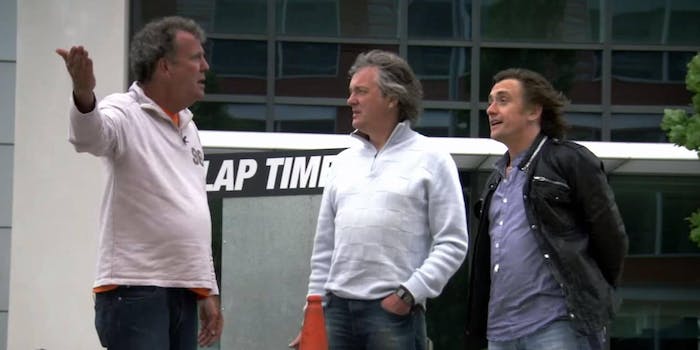 No, it's probably not going to be called 'House of Cars.'

The world has been out of sync since Jeremy Clarkson was fired from motoring show Top Gear earlier this year. Subsequently, co-hosts Richard Hammond and James May’s contracts with the BBC expired and were left pending.

According to The Mirror, a very close source is claiming that Hammond and May rejected a $4 million offer from the BBC in lieu of joining up with Clarkson for a new show on Netflix. It’s also reported that longtime Top Gear producer Andy Wilman will be joining the trio.

According to the source, “Flattering though it is to be offered huge sums, there’ll be no going back. It wouldn’t feel right and their heart wouldn’t be in it. They’ve always said they come as a team and that hasn’t changed.”

That statement does ring true, and May said back in March that “the three of us come as a package.” The source went on to say, “They are all very excited at the prospect of having total editorial control over their new show, to make it and get it distributed.”

Although the BBC was offering both Hammond and May a much larger sum of money than what they’re accustomed to, “they would stand to earn much, much more than they would with the BBC.” The BBC is a public network that doesn’t earn from ad revenue like most other television channels.

Fans of subreddit r/TopGear bombarded Netflix with messages, begging the streaming giant to take on the three hosts for a new show. Maybe it’s what drove Netflix to allegedly pursue the trio. There were also rumors that Netflix would name the show House of Cars, but let’s hope that isn’t the case.

Hammond and May did film the final two episodes of Top Gear without Clarkson, as the footage still needed to be aired. It should hit television screens in the coming weeks.

The three are also touring around Europe for what was formerly known as Top Gear Live, but after Clarkson’s sacking it was changed to Clarkson, Hammond & May Live. The BBC didn’t feel it right to cancel the live events, as fans had purchased tickets well in advance.

What about the future of Top Gear? Well, the BBC is scrambling to try to relaunch the show. It’s been reported that Chris Evans is on the short list to host. There were also reports of having different hosts for each episode.

The source went on to say, “Clarkson had his faults but his ­importance to the show cannot be understated. He wrote it, came up with ideas, and was its heart. It will need about three or four good operators to replace him.”

Netflix has not publicly confirmed the show yet.