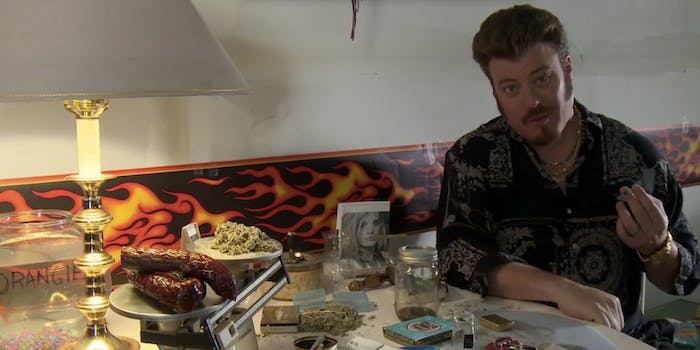 Surprise! You’re getting another season of ‘Trailer Park Boys’ on Netflix

Guns, dope, kitties: all the principal elements of comedy.

The exceedingly profane and surprisingly tender Canadian mockumentary Trailer Park Boys has become something of a cult hit even in the U.S., thanks to Netflix, which has made the entire series available for streaming. Last month, the company went one step further and announced that the often-intoxicated criminal buddies would be added to their lineup of original programming.

It’s been almost six years since small-time hustlers Julian, Ricky, and Bubbles said farewell in a special episode intended to serve as the series finale—later followed by Countdown to Liquor Day, a second feature-length outing. But a satisfactory ending for these beloved characters seems impossible, as fans continue to press for more ridiculous scrapes and shootouts. In Netflix’s teaser for the show’s eighth season, coming this fall, we find the boys in high spirits, making cash with a variety of shady schemes soon to come crashing down around them.

Season 9 will also be exclusive to Netflix, which struck a distribution deal that superseded producers’ plans to air new material on their own website, Swearnet. They’ll additionally host three hour-long specials, as well as a couple of films, including one titled Don’t Legalize It, out on April 18. Presumably it focuses on the difficulty of maintaining a profitable black market marijuana business when your government is in the process of decriminalizing the stuff.

Between this and Arrested Development, Netflix has been doing a great job of reviving TV shows that people aren’t ready to say goodbye to. Fingers crossed for Futurama?