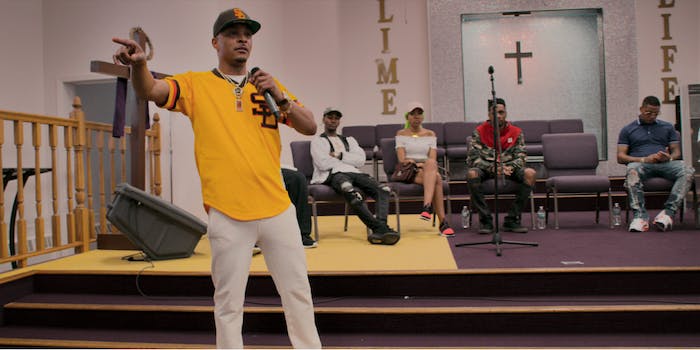 T.I. and Nas examine the power of hip-hop in Netflix’s ‘Rapture’

A series about the 'nutritional value of hip-hop.'

Before a screening of two episodes at the Paramount Theatre, on the last day of SXSW, producer and director Sacha Jenkins (Mass Appeal) said they sought to illustrate the “nutritional value of hip-hop.” As such, Rapture doesn’t function like a typical documentary with chronological breakdowns and archival footage and talking-head interviews. Instead, it assesses each subject’s influence and growth, and that’s especially true for the episode featuring Nas and Dave East.

Queens, New York, is the setting, and the first story we hear is one from Nas’ brother, who, from a barbershop chair, breaks down how he stopped selling drugs after Nas surprised him with a visit. We see some archival footage of Nas performing in 1994, the year his seminal album Illmatic debuted, but don’t come away with any more sense of how he struggled to come up. That focus is instead on Dave East, a rapper Nas helped spotlight and promote. We get a colorful interview with his family, a look at his relationship with his young daughter, and see how he navigated his rise after being in prison. The split between East and Nas makes the narrative flow a little uneven, though we do come back at Nas at the end and hear his theories on ghosts.

The episode with T.I. zooms out a little more, and follows the rapper’s public shift to political activism and socially conscious music. It’s a more ambitious episode and director Marcus A. Clark said in a post-screening Q&A that he wanted it to “generate as much empathy as possible,” and be a history lesson to break down ideas about racism.

It’s not an easy episode to watch: As T.I. ponders what kind of future he wants for his kids, and we watch his pivot from “Rubber Band Man” to the more socially minded Us or Else, we’re shown footage from the shooting deaths of Philando Castile, Alton Sterling, and Mike Brown. T.I. interviews Harry Belafonte, Andrew Young, and Jane Elliott about their Civil Rights activism and what we can do now to educate.

“Music is my passion but it’s not my purpose,” T.I. said after the screening. He wanted to use his “voice to represent the voiceless,” to help the communities that are “underserved” and “disregarded.” Rapsody and Just Blaze, who have their own episodes (Logic, G-Eazy, 2 Chainz, and A Boogie wit da Hoodie round out the series) were also in attendance, and Rapsody said she was approached because they needed a “female presence.” Hopefully, the next season spotlights more than just one woman.

The production, animation, and cinematography of Rapture is solid, and as an entry into Netflix’s documentary canon, it’s a welcome one. The episodes screened ran a little long, but they offered a look beyond status at the generational thread of hip-hop. As T.I. said, when Dave East is an ambassador of the United Nations, we can look back at Rapture and see where everyone was at that moment.