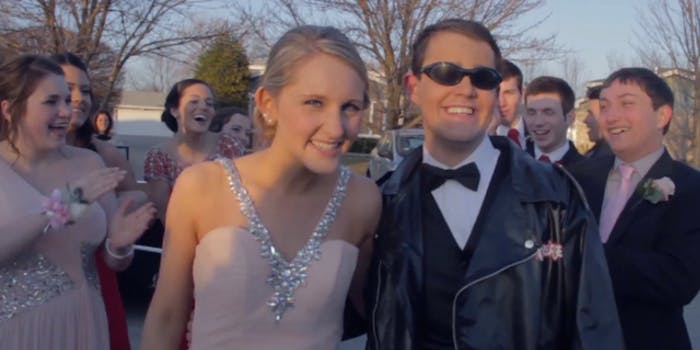 Meet the teenager who asked Netflix to prom

What brand will you ask to prom?

This is modern romance: Boy asks corporation to go to prom with him on Twitter, corporation agrees, boy goes to prom and gives corporation its own unique brand of social media promotion.

That’s the story of Muthana Sweis and Netflix. Back in January, the 17-year-old junior at Chicago’s Marist High School asked the streaming giant to accompany him to prom, if he got 1,000 retweets on the tweet. The Internet’s all about a genuine love story, and granted him his wish. Netflix said yes the next day, and “accompanied” him to prom on March 29.

Hey @netflix if this gets 1,000 retweets will you go to my junior prom with me?

We said yes! We’re third wheeling to #Prom2014 with @muthanasweis and his date: https://t.co/0AQKYrljxj

Yes, Sweis actually had a date; Netflix was more of a virtual chaperone. They offered Sweis a car, driver, and tux, all based on movies they stream: a Grease-themed Buick driven by Danny Zuko, and James Bond’s tux from Skyfall. (I personally would have picked Ben Stiller’s suit from Zoolander, and the Breaking Bad RV driven by Jack Sparrow, but it seems Sweis wanted to keep it “classy.” Teens are so weird!)

No word on what happened after prom: Did Sweis spend 30 minutes picking a movie and then fell asleep two minutes into it? (Netflix joke!) However, this stunt did set an interesting precedent for how we interact with brands on social media, and how they interact with fans. There’s a likelihood Sweis didn’t actually approach Netflix, but rather, the other way around. Still, people are now talking about that time a teenager went to prom with Netflix, so it worked.

It also raises a somewhat terrifying question: So, what brand will you ask to prom?