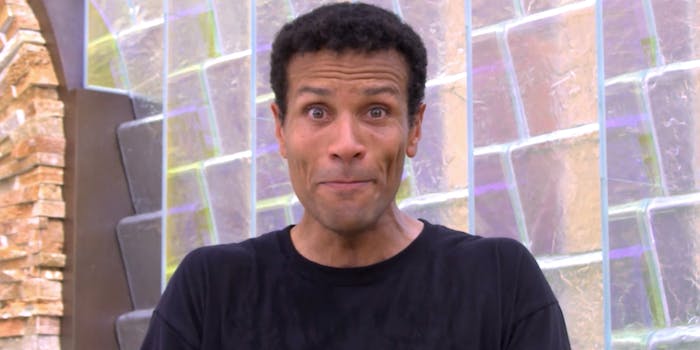 On one hand, the Internet is a wonderful, lush cascade of joy and information. On the other, far less cared-about hand, this explosion of access has quickly erased the custom of secret-sharing via bargain bins and grainy VHS.

The particular happiness of discovery, the unique satisfaction of sharing, has vanished.

Of course, this tradition of “content trading” continues in Gchat windows, the dark expanses of Vine, and drunken pre-games kneeling at the altar of YouTube tabs: “Oh, you have to see this one.” But with the Web’s massive library so easy to navigate, the particular happiness of discovery, the unique satisfaction of sharing, has vanished. Which is why the accessible technical video on Netflix’s servers, Example Show, is my favorite find in years.

Although not as immediately comedic as Netflix’s glitched synopses, this “show” is a slow burn. Example Show is a seemingly random collection of scenes used to test audio sync and frame rates. The clips will make complete sense to anyone in the AV industry: a running fountain; shots of our hero running, moonwalking, ball-bouncing, juggling; a monologue from Julius Caesar performed with violent diction.

I’m sure you’ve had the displeasure of trying to watch your favorite show with the dialogue a fraction of a second late, giving that slight “kung-fu dub” effect (an occurrence my parents seem to never notice: “It’s fine! Just watch the pictcha show! Grissom’s about to solve the case!”). That, among other technical reasons, is why this video exists.

Needless to say, this makes for great drugged viewing.

Although uploaded four years ago, and covered on HuffPo and Gigaom, the show is largely unknown. I haven’t told one person about this who already knew what it was, which allows me to show them for the first time, and I get a good fraction of the joy I experienced in sharing a video of my seventh-grade math teacher losing his shit on the local news about Colorado’s property tax.

There are many enjoyable scenes, ranging from comedic to soothing, which I won’t detail here. I hope you can enjoy them with fresh eyes. The 293 member reviews also contribute to the comedy fodder, as does the repeated subtitle of the never-heard line “There’s no crying in baseball!”

Our “actor” is a poster child for those dedicated to perfect sound—if you went to film school or recording college, you’ve undoubtedly met a version of this man.