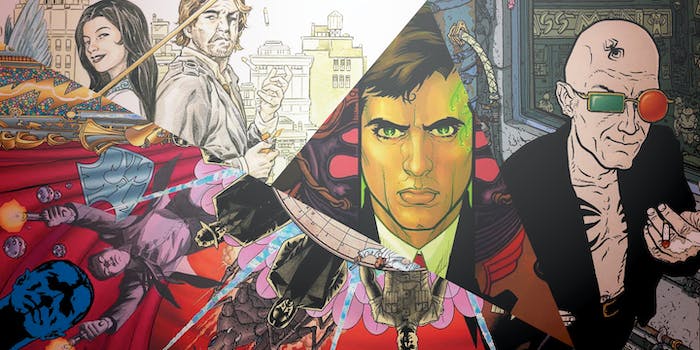 Superhero movies rule the box office, but there’s an even more exciting comic-book explosion happening on the small screen.

With Marvel and DC engaged in a head-to-head battle to see whose spandex crowd can print the most money, superhero movies continue to rule the box office. But there’s an even more exciting comic-book explosion happening on the small screen. The Walking Dead is a massive hit, introducing millions to a comic series most of them had never heard of six years ago. AMC is about to get super weird and downright blasphemous with an adaptation of Garth Ennis and Steve Dillon’s outstanding Preacher. That show is being shepherded by Seth Rogen and Evan Goldberg, who are also teamed with Supernatural’s Eric Kripke on to develop Garth Ennis’ pitch-black superhero satire The Boys for Cinemax. And assuming the gods accept my continued sacrifices, FX might finally be the ones to bring Brian K. Vaughan’s superlative Y: The Last Man to the screen.

But that’s just scratching the surface of what’s in the works, and there are so many more amazing comic series worthy of making the leap from page to screen. While Netflix has given us two amazing comic-book shows in the form of Daredevil and Jessica Jones, there’s so much more potential for them to explore outside the Marvel sandbox. Here are our top picks for the comic series Netflix needs to lock down before somebody else grabs them.

In a twisted future full of on-demand cannibalism, elective extraterrestrial gene-splicing, and handguns that make you shit yourself uncontrollably, journalist Spider Jerusalem may be the last incorruptible voice left. He’s an absolute bastard, but at least he’s honest and unflinching. As Warren Ellis’ Transmetropolitan opens, Spider is dragged out of self-imposed exile and back into the corrupt, filthy, cyberpunk Sodom known only as “the City.” He still owes his editor two books, see, and that means immersing himself back into a culture he’d just as soon glass over with a tactical nuclear strike.

While we don’t yet have foglets or bowel disruptors, it’s uncanny how prescient the satirical elements of Transmet have proven to be (especially the presidential campaign of Donald Trump, which could have been lifted straight out of the series). In an election year that seems more batshit bonkers with every passing day, Spider’s journalistic quest to take down politicians with nicknames like “The Beast” and “The Smiler” plays in 2016 like a glorious exercise in wish fulfillment. It’s funny, it’s brutal, it’s occasionally even heartbreaking. But mainly, it’ll make you realize how badly we need our own Spider Jerusalem to come down from the mountain and save us from ourselves.

I could easily fill this entire list with books by Warren Ellis, but instead I’ll stop at two. And with superheroes ascendant at the box office, now is the perfect time for Netflix or Amazon to bring Ellis’ dark riff on that colorful modern mythology to the small screen. The series follows a group of self-described “archaeologists of the impossible” who are recruited to investigate the secret history of the world. The frost-controlling Elijah Snow is the latest recruit, joining the superhuman Jakita Wagner and the tech savant known as The Drummer. Together they investigate lost places and forgotten people, all while Elijah attempts to learn more about the group’s true origins—and the identity of its benefactor, the mysterious “Fourth Man.”

While Planetary begins as a cross between X-Files and X-Men, the series puts its own spin on many of the comic-book characters currently dominating the box office, most notably a worst-case scenario version of the Fantastic Four that imagines what happens when great power is not remotely tempered by a sense of great responsibility. With a cracking good mystery at its core, Planetary would have the makings of an awesome TV show even without all the postmodern superhero deconstruction. But with it, it couldn’t be more timely.

Both Transmetropolitan and Planetary would require a significant budget to do right—maybe even more than Netflix’s deep pockets could afford. 100 Bullets, on the other hand, is well within the scope of what the streaming giant has done before. And the high-concept pitch has been begging for a screen adaptation for over a decade now. What if someone had ruined your life? And what if, sometime later, a man showed up and promised you consequence-free revenge against the people responsible? A briefcase filled with an untraceable firearm and 100 untraceable bullets, and a guarantee that, no matter what you do, you’ll get away with it. What would you do?

Over the course of 100 issues of Brian Azzarello and Eduardo Risso’s concussive modern noir, the enigmatic Agent Graves offers his briefcase and guarantee of amnesty to one seemingly unrelated person after another. Some accept enthusiastically, while others are understandably suspicious; none, however, remain unchanged in the aftermath, and gradually a larger tapestry begins to reveal that there’s a lot more going on than a simple exercise in selective morality. Mad Max star Tom Hardy was signed on to produce a TV adaptation of 100 Bullets for New Line as of last summer, but the prospective series has yet to find a home. Netflix, if you’re listening: Get Tom on the phone, already!

Both ABC’s Once Upon a Time and NBC’s Grimm have been playing with the notion of fairy-tale characters existing in the modern world for several seasons now, but Bill Willingham’s Vertigo series Fables did it a decade earlier… and a hell of a lot better. With 150 issues’ worth of source material and the content freedom Netflix could provide, a Fables streaming series would be a chance to show Once Upon a Time how it’s done.

Like the <strike>ripoff</strike> similar ABC series, Fables envisions that the characters of fairy tales and folklore are real, and are living under the radar in our own world. The ones who can pass as human live among us in a New York conclave called “Fabletown,” while the characters such as the Three Little Pigs have to stay incognito at an upstate farm. The Fabletown community is policed by the former Big Bad Wolf—now appearing human and calling himself “Bibgy”—and governed by deputy mayor Snow White. Fables delves into the day-to-day challenges of fantastical characters and creatures trying to make it in the modern world, as well as the larger mystery of “the Adversary,” a terrible foe whose thirst for conquest drove the Fables out of their homeworlds and into the real world centuries earlier. A movie script was in the works from Kick-Ass screenwriter Jane Goldman as of last year, but like most comics, Fables would work much better as a TV show.

Governing a community of magic characters and talking animals might be a challenge, but it’s nothing compared with trying to run New York. In Brian K. Vaughan and Tony Harris’ Eisner Award-winning Ex Machina, it’s the toughest thing Mayor Mitchell Hundred has ever done—and that’s including his stint as an honest-to-gosh superhero going by the name of The Great Machine. So, how does a guy trade in jetpacks and derring-do for the snake pit that is politics? Well, to start, you save the day on 9/11… sort of. The first issue of Ex Machina concludes with the unforgettable image of the New York skyline with one of the World Trade Center towers still standing—the one that, in the world of Ex Machina, Mitchell Hundred saved. But one still fell, and that day changed him, compelling him to give up the Superman schtick and try to change the world from ground level by running for mayor.

One part political drama, one part superhero thriller, and one part mystery delving into just where the hell Mitchell’s powers really came from, an Ex Machina series done right would be like nothing else on television. It also has the advantage that Mitchell’s superpower—the ability to speak to and command machines—would be relatively easy to bring to life onscreen, with only the flashbacks to his days as a full-blown costumed hero requiring any effects heavy lifting. More importantly, however, Mitchell Hundred in a cast full of them, and Ex Machina is a smart examination of public service and a good man who fully believes that old line about great power and what comes with it.

Finally, we come to my personal “dark horse” choice. Cartoonist Phil Foglio began telling stories of hard-drinking interplanetary mercenary Buck Godot in 1982, and his adventures continued throughout several short stories and one outstanding miniseries that wrapped up in the late ’90s. Buck is a “Hoffmanite,” a human offshoot species from a high-gravity world. His bulk lends him the intimidation skills that come in handy in his line of work, but it’s his brains and cleverness that keep him alive on the lawless colony world of New Hong Kong. There he works as a “zap gun for hire,” operating under the unofficial slogan “Always available, but never free” and taking just enough work to keep the booze money flowing.

Unlike the rest of the items on this list, the ideal Buck Godot adaptation would be an animated series or miniseries, because Foglio’s stylized cartoony art style is part of Buck’s appeal. While the property is relatively obscure, the Gallimaufry miniseries that wrapped up Buck’s adventures would make for a stellar limited series, as it showcases all the best qualities of Foglio’s Buck stories. It’s funny: Buck gets dragged into the whole adventure because he’s trying to dodge the tax man. It’s got a genuinely interesting mystery at its core, with twists and turns aplenty. And it showcases Buck Godot’s rich and diverse universe splendidly, unfolding on the titular Gallimaufry, an enormous space station that serves as the hub of galactic civilization, packed to the airlocks with colorful characters and creatures, many of whom try to kill Buck at one point or another.

It’s a long shot, to be sure, but if I ever find a magic genie lamp laying around, you can look forward to watching a crazy, mustachioed Hoffmanite hunt down teleporters and outwit murderous clones in Buck Godot: The Animated Series.