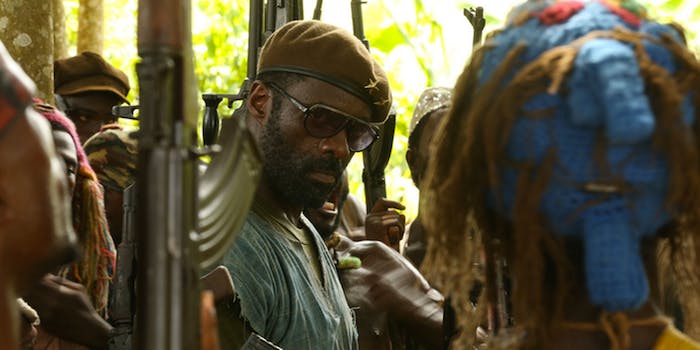 On the heels of news that Cary Fukunaga is directing a reboot of It come reports that Netflix just picked up his drama Beasts of No Nation, starring Idris Elba.

Deadline reported that Netflix was “near a deal” yesterday to pick up worldwide rights to the film, which is based on Uzodinma Iweala’s 2005 debut novel. Elba plays an African guerrilla forces commander who finds Agu, a young African boy, and trains him to become a child soldier.

The film is already getting Oscar buzz, and this isn’t the first time Netflix has snatched up a film thought to be award-worthy. The deal is rumored to be around $12 million, and it would include both streaming rights and theatrical release.

This only adds to Netflix’s new Jenga-like movie slate: Another war drama, Jadotville, was acquired last month, and the company announced Pee-wee’s Big Holiday last week. A Crouching Tiger, Hidden Dragon sequel and four-movie deal with Adam Sandler is also in the works.