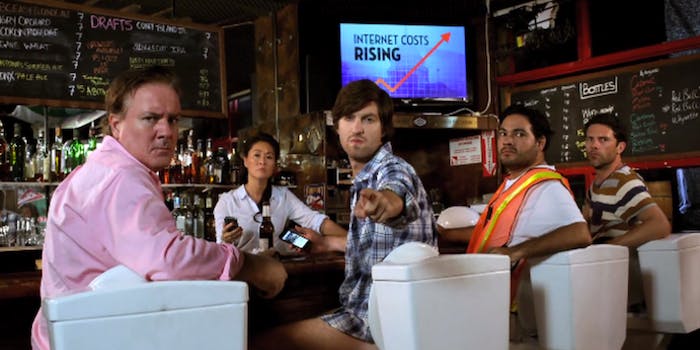 Life in the splash lane?

A new song about the dangers of net neutrality is really driving home the point that our rights will be flushed down the toilet. This clip is by Thinkmodo, the same viral marketing firm that created the devil baby and telekinetic coffee shop pranks. They’ve now turned their attention from promoting horror movies to net neutrality, with a stop-motion video for the anti-net neutrality song, “Don’t Flush Our Rights Down the Toilet.”

An “Internet slow down day” is being planned for later this month, to show what certain sites might look like forever buffering. The FCC’s deadline for comments on the issue of net neutrality is Sept. 15. If you make it to the end of the clip, you’ll see it’s basically an ad for Thinkmodo’s client, Namecheap, an Internet provider that’s attempting to educate the public on the issue and push the toilet imagery on their site as well.

It’s not exactly clear why toilets were used. Perhaps it’s a reminder that we might have a harder time streaming Netflix while we’re on the toilet. (Admit it, you’ve done it.)