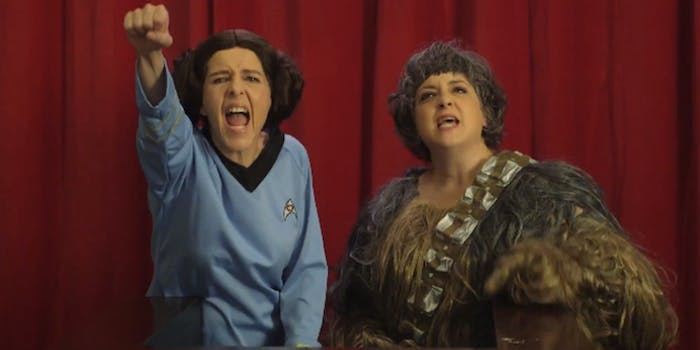 The song envisions a future “designed by teenage guys,” where it’s a “permanent ComicCon."

Neko Case recently shot down Playboy’s assertion that she is a woman in the music industry, with a series of eminently quotable tweets. Now, she’s taking on fanboy culture.

Her latest song with collaborator Kelly Hogan, “These Aren’t the Droids,” is part of a comedy benefit album 2776: A Millenium of American Asskickery, and the video features Case in a Star Trek uniform and Princess Leia braids, while Hogan sports a Chewbacca costume. The Office’s Ellie Kemper stars as a woman who’s dating an emotionally unavailable Stormtrooper.

The song envisions a future “designed by teenage guys,” where it’s a “permanent ComicCon,” and the video has sparked a lot of conversation about the song’s message, and whether it minimizes women’s growing involvement in geek culture. One YouTube commenter claimed it just perpetuates stereotypes:

“I’m….I have very mixed feelings about this song. Yeah, I’m a fairly strong and active feminist, but I am also a huge geek. Female geeks. Who wear their stormtrooper uniforms to the kitchen table. That…that particular breed comes in “female,” too. I want to like this song, but it feels so exclusionary that I can’t. We have enough of the “female geeks don’t exist” from the male section, it kinda really hurts to get it from the female section as well.”

Annalee Newitz at io9 wrote about her mixed feelings as well:

“It’s hard to tell exactly what Case and Hogan are trying to say here, because a lot of this is just them goofing around. But they are very clear about one thing: they think geek culture is for 13-year-old boys, and that women have no place in it. They sing about a feminist future where geek culture is replaced by girl power and kittens, which is frankly weaksauce.”

But should the video’s spoofing of comic book obsessives be taken literally? Other commenters on io9’s post saw it differently:

“I think the message is pretty clear. Its about how Geek culture has been and remains more or less a Boys Club that women can only marginally penetrate on their own terms, and satirizing the juvenile fears most of geek culture thinks of the ways women would change ‘their’ territory if they were able to engage with it on their own terms.”

Case seems to be critiquing the culture’s gendered tilt, illustrated when she lists off all the superheroes with “man” in their name. (Related: Listen to “Man,” from her latest album.) Yes, the video includes some hackneyed representations of geek and sci-fi culture. However, a closer reading of the lyrics draws a bigger picture of where the power lies in that culture, the harassment and sexism that still exists, and what the future might look like if that continues. Perhaps it’s a call to take the power back.