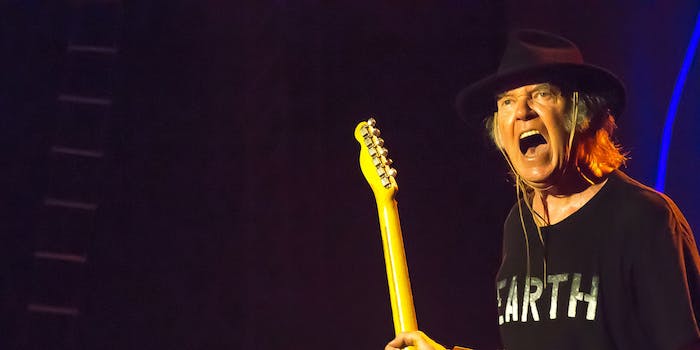 ‘I’d like to start my day off without helping Monsanto.’

The Monsanto Years, Neil Young’s upcoming LP with Willie Nelson’s sons’ band Promise of the Real, is targeting the GMO giant Monsanto—with one of the songs hitting at the heart of our coffee obsession.

The LP won’t be out until June 16, but Democracy Now has an exclusive clip of a live performance of “Rock Starbucks.” Starbucks is allegedly tied to Monsanto, which Young pointed out when he encouraged fans to boycott the company last year.

The song starts around the 26:23 mark and features Young and Promise of the Real drinking their coffee while they sing about the two companies’ ties with each other. After all, they just want a cup of coffee like the rest of us. They just don’t want a GMO with their cream and sugar.