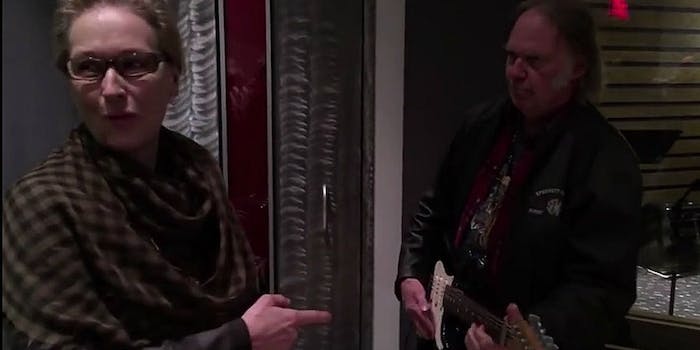 That time Meryl Streep got a guitar lesson from Neil Young

Streep was rockin' in the free world.

With Meryl Streep starring in Ricki and the Flash, a new film about an aging rock star who tries to reconnect with the family she blew off 20 years earlier, it makes sense that Streep would be stoked about receiving a guitar lesson from the legendary Neil Young.

Turns out that, yes, she was, in fact, excited about it.

Most actors would bow at the feet of Streep. But at the end of the video, Streep does the whole “I’m not worthy” thing in front of Young. That’s a fitting tribute to Young, one of the world’s best rockers, from Streep, who might be the best actress of her generation, after Young spent about 45 minutes giving Streep her first guitar lesson.

And Streep apparently put in the time while tweaking her movie character. Director Jonathan Demme told Entertainment Weekly that Streep told him she’s been obsessed with electric guitar since she was five years old. The two quickly decided before filming that Streep was going to have to perform live on film, and that meant she had to learn how to play the guitar.

Aside from hanging out with Young and co-starring with Rick Springfield, she apparently got right to work. As Demme explained to EW:

They rehearsed so much. Between three and four weeks playing the songs—with Meryl. Full band. There was a wonderful bar in New York that had just closed, the Rodeo Bar and Grill. Kind of a country rock club that had been around forever. We got it. We were able to rehearse in a bar. They came in Monday through Friday and worked a full day. Meryl wouldn’t let me come for two weeks! She let me know when I could come. They were a real band! They had developed great friendships. All the musicians were excited to develop chemistry with Meryl.

The idea was to rehearse right up to the first day of filming and then film all the performances right away. We finished rehearsing on a Friday and shot on Saturday.

Here’s how it turned out, at least in movie trailer form.

Here was how Streep described the meeting with Young.

Ah, turning it up to 11, eh? Classic move from an experienced rock star.