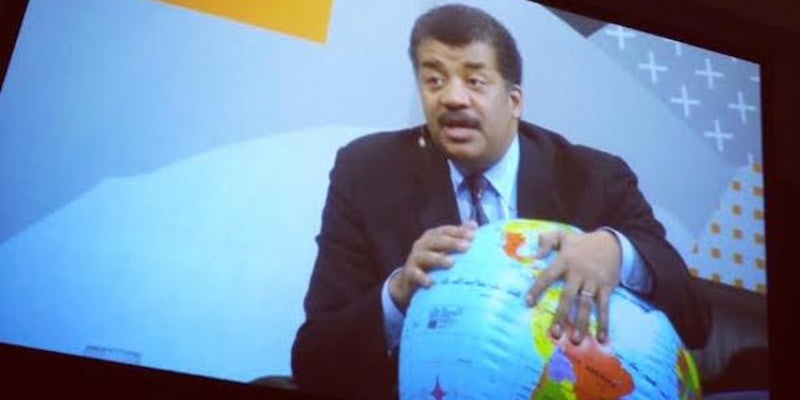 Neil deGrasse Tyson is bringing science to a mainstream audience

"A scientist is just a kid who never grew up."

On Saturday afternoon, we were the Earth revolving around Dr. Neil deGrasse Tyson. Roughly 3,500 people squeezed into the Austin Convention Center’s Exhibit Hall 5, and a nearby simulcast ballroom, to watch the astrophysicist give the SXSW Interactive keynote speech. He was introduced as the “man who has the power to demote Pluto,” but he was there to impart wisdom about much more than a dwarf planet.

In a conversation with journalist Christie Nicholson, he spoke of the state of science literacy and education:

“My personal definition of science literacy is how much do you wonder about the world around you? Children do this; they turn over rocks, but adults try to constrain that. … A scientist is just a kid who never grew up.”

He waxed poetic about the periodic table, and the dangers of believing pseudoscience. He claimed that if an asteroid is heading your way, you want to be with the people who can figure out how to deflect it, not the people screaming “Run!” He also said that the first trillionaire will be the first person to mine asteroids. (He didn’t mention anything about mining Bitcoin.)

Dr. Tyson’s wisdom often appears on Twitter, where he’s quick to poke holes in Hollywood blockbusters (and show off his selfie with President Obama and Bill Nye). But lately, social media has been buzzing about a new generation of Cosmos, the show originally hosted by Carl Sagan in the ’80s, which has developed a cult following in the last three decades.

Tonight, Tyson’s version of the show debuts on Fox, executive produced by Sagan’s widow, Ann Druyan. Since Tyson is social media’s pop culture scientist, he’s opening up Cosmos to a whole new generation, something he acknowledged on Saturday.

“One of the goals of Cosmos is to empower people to take ownership,” he said. “Cosmos debuts tomorrow night in 170 countries, the largest rollout of a TV series ever. Cosmos in its original incarnation took science out there and put a thread through that science, through you. It’s woven this tapestry through that thread, so you know and understand your place in the universe.

“The media leading up to Cosmos has been extraordinary. Cosmos is landing on fertile ground because science is becoming mainstream.”

He then added that President Obama is going to introduce the first episode of the show on Sunday night. That’s a pretty impressive feat for a show about science. And much of the debate and discussion about the show will be happening in our own little solar system: social media.