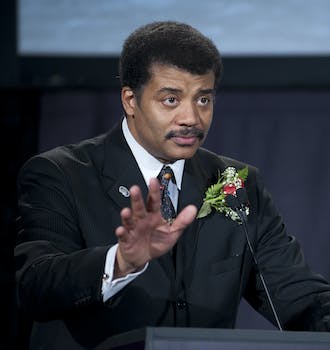 It's not every day that a science-fiction movie gets praise from Mr. Tyson.

Christopher Nolan’s latest film follows a team of astronauts through a black hole as they search for a habitable planet for humankind to colonize. Although its central storyline is arguably a fantasy, the film’s depiction of wormholes, relativity, and gravity are all grounded in real science, thanks in part to Nolan’s astrophysicist consultant Kip Thorne. One of Thorne’s most noticeable contributions is the shape of the black hole: a planet-like sphere rather than the popularly imagined window or hole into another part of the universe.

Tyson’s Twitter praise for the movie covered this and other aspects of Interstellar that clearly bore the influence of Thorne’s scientific scrutiny.

In #Interstellar, if you didn’t understand the physics, try Kip Thorne’s highly readable Bbook “The Science of Interstellar”

In #Interstellar, if you didn’t understand the plot, there is no published book to help you.

In #Interstellar: They explore a planet near a Black Hole. Personally, I’d stay as far the hell away from BlackHoles as I can

In #Interstellar: You observe great Tidal Waves from great Tidal Forces, of magnitude that orbiting a Black Hole might create

REMINDER: Never look to me for opinions on new films. All I do is highlight the science one might or might not find in them.

The astrophysicist mainly discussed Interstellar‘s realistic portrayal of zero gravity and its plausible interpretation of black holes, but he also highlighted Nolan’s casting choices. All of the main characters, he noted, are scientists or engineers, and two of them are women.

In #Interstellar: All leading characters, including McConaughey, Hathaway, Chastain, & Caine play a scientist or engineer.

Tyson’s commentary will likely settle a few of the Interstellar-related arguments that have been raging online this weekend, but it’s still up to audiences to decide whether scientific accuracy makes Interstellar a better or more entertaining film as a whole.