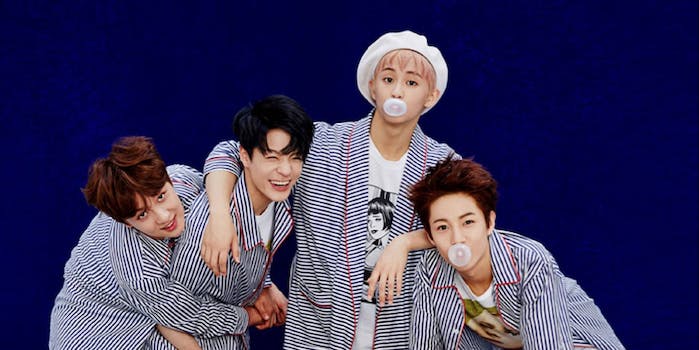 If you wanted a new song to get stuck in your head for hours, NCT Dream has just the earworm.

The teenage boy group debuted with “Chewing Gum” on Wednesday, a fresh and bubbly bop with the perfect back-to-school vibe. The seven-member group is a unit of the larger entity NCT, or Neo Culture Technology, a younger brother band to the likes of Girl’s Generation and Exo.

Each release by the band showcases a different combination of members that promote under a new variation of the NCT name. Like how the Wu-Tang Clan members all pop up on each other’s albums.

“Chewing Gum” marks NCT’s first Chinese-language track. (There is a Korean version too, of course, being a K-pop group and all.) SM Entertainment, the group’s home base, has plans to expand internationally through different combinations of NCT teams. Priding itself in such an international crew, NCT hosts members from Korea, Japan, Thailand, America, Canada, and China.

NCT Dream joins the ranks of its previous NCT subgroups, NCT U and NCT 127, with the release of “Chewing Gum.” It’s a step toward different directions than the previous two, as those groups boasted a bass-reliant, strong sound with “The 7th Sense” and “Firetruck,” respectively.

While the previous videos spotlighted the boys’ powerful choreography, “Chewing Gum” focuses on an adorable storyline. The group plays school boys who just can’t get enough of the sticky, smacky candy and will do anything to sneak it past the strict, blond proctor. It takes advantage of the teen boys’ youthful style (their average age is just under 16) with bright colors and a playful, noisy sound.

The members of NCT Dream include an all-new lineup from NCT U and NCT 127, with the exception of the oldest member, Mark. The full crew comprises of Mark, Renjun, Jeno, Haechan, Jaemin, Chenle, and Jisung.