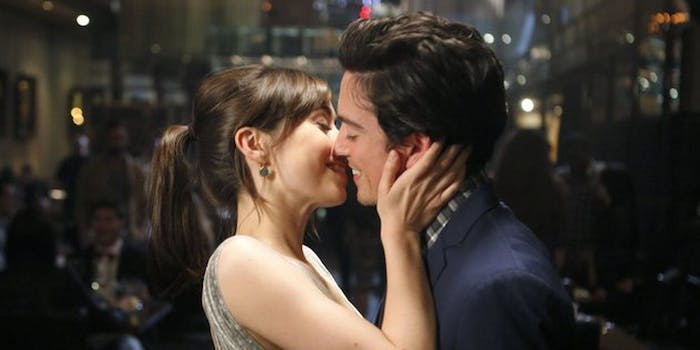 Can they keep this up week after week?

Sometimes the sitcom remixer gets it right.

Take two parts 500 Days of Summer, one part Mad About You, mix aggressively with some cross-generational pop culture references, and you have the half-hour meet-cute sitcom A to Z which debuts today via NBC’s digital properties (nbc.com, Hulu, etc.) and iHeartRadio in advance of its Oct. 2 network TV premiere.

When last we saw Ben Feldman (Mad Men), he was headed for the looney bin. He returns to the screen as Andrew (A) who meets Zelda (Z, Cristin Milioti of How I Met Your Mother) in an old-fashioned-meets-social-stalking sort of plotline. He works for an online dating site, and she is a lawyer. They both have odd, goofy-in-a-charming-sort-of-way friends who fill the 24 minutes with enough refreshing banter to keep the show moving with a clever voiceover narrative from Katey Sagal. What makes the show hum are the pitch-perfect performances and dead-on references from everything from Back to the Future to the sociological treatise the Baader-Meinhof Phenomenon (I had to look it up too).

Adding easy sharing tools and the hashtag #IHeartAtoZ allows the digital court of public opinion to weigh in on the show. For NBC, it’s a risk-reward move, as negative buzz could torpedo the program before it airs, while even a slight groundswell of positive digital energy could be the best marketing money can buy.

NBC didn’t respond to a request for comment in time for publication.

Just a few hours into the digital debut, the Twitterverse is quite positive on A to Z.

Thank you @NBC_AtoZ & #iHeartAtoZ for being amA-to-Zing & letting it be Oct 2, already. Definitely, one of my fav new shows. :D <3

The pop culture references… the great cast… rooting for this one. #IHeartAtoZ http://t.co/gkLtRDnGQM

Can they keep up this level of rare television brilliance every week? If so, this is a winner.