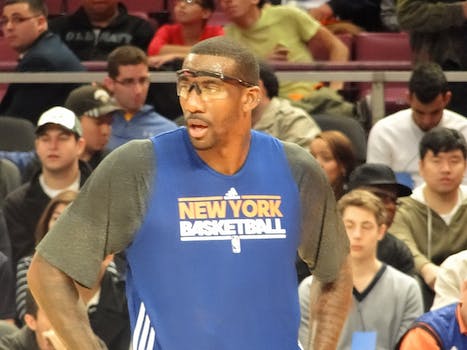 In the short window between the NBA’s lockout drama and the start of the season on Christmas, the league has been in a full-court press for public relations.

The video-stream didn’t go as smoothly as intended and only lasted about 40 minutes.

Aldrige had technical difficulties for the first 15 minutes, which mostly left the players to their own devices.For the first few minutes, anyone watching the stream simply saw the three stars staring at their webcams, smiling and muttering to each other. Fans were asked to submit questions through an application on the Facebook page, but either few did or technical difficulties kept most questions from going through.

Curry was apparently logged in at a gym; Durant was hunched in front of his computer with thick-framed glasses, sitting in front of a nondescript white wall. Stoudemire, who proved to be the star of the show, appeared to be at his house. Throughout the meeting, he carved and ate his dinner—chicken Parmesan, he said—and wrestled with his son, Amar’e Jr., who wanted to sit on his father’s lap and meet the people he talked to with his computer.

After Stoudemire introduced his son to his fellow players, the boy squirmed and left his father’s lap. “They look like you, daddy,” he said off camera.

Most of the questions asked by fans were softballs, and the three players answered them gamely.

“If you were playing fantasy basketball, and you have the first [overall] pick, who would you choose?” asked one. Amar’e and Curry both picked Durant, who gave an aw-shucks smile. Durant chose Chris Paul.

The players talked a little about music. Durant likes Drake, Stoudemire Jay-Z, and Curry a Christian rapper called Bizzle. They talked a little shop about the league, like who would get the MVP this year (Durant says Dwyane Wade), and the drama surrounding the Chris Paul trade. (They all were surprised.)

There were a few moments of awkward silence from the other three men before Stoudemire laughed. “I’ll take my kids ice-skating,” he said. (That would be after the New York Knicks’ season opener against the Boston Celtics.)

One of the final questions was a fan asking how the players thought Shaquille O’Neal will do as a TV analyst this season on Inside the NBA, alongside Charles Barkley.

“Shaq is probably the biggest character the league has ever seen,” Stoudemire said. “And he’ll be beside a guy who barely speaks English in Charles Barkley.”

It was an all-too-rare moment in the conversation where users could really feel a sense of connection with the players. Chalk that up as win for the NBA.