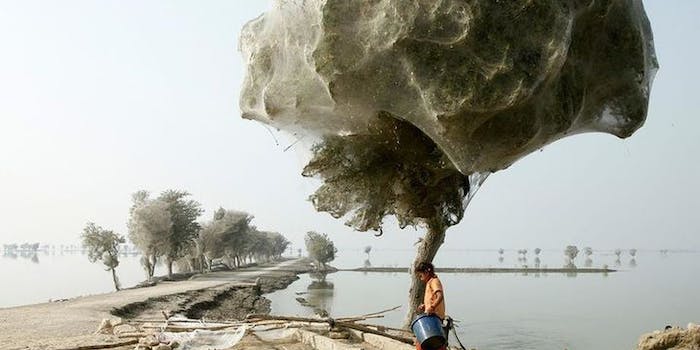 Flooding in the village of Sindh in July 2010 resulted in trees being covered with massive spider webs, a powerful image captured by National Geographic and shared 38,000 times on Facebook.

Remarkable pictures shared on Facebook often turn out to be hoaxes or doctored in some way. Unfortunately, the photo of Pakistani trees encased in spider webs is all-too real.

The image was captured in a village called Sindh in July 2010, amidst terrible flooding that at one point left a fifth of the country submerged. When the water rose, bugs in the area had to seek higher ground. The caption comes directly from National Geographic, who first published the photo. “The water took so long to recede, many trees became cocooned.”

It got worse. According to the photographer, “if you stood under one of these trees, dozens of small, very, very tiny spiders would just be dropping down onto your head.”

National Geographic rereleased the photo on its website last December. A week later, it was reposted by Facebook group Earthian, an Indian program that awards students who write papers on sustainability. The post has since been shared almost 38,000 times—and the number’s still growing.

National Geographic offers one small respite for arachnophobes: It probably wasn’t exclusively spiders encasing the trees. “It came to our attention that it’s not certain that all the silk pictured was spun by spiders,” reads a correction. Caterpillars likely also played a part. 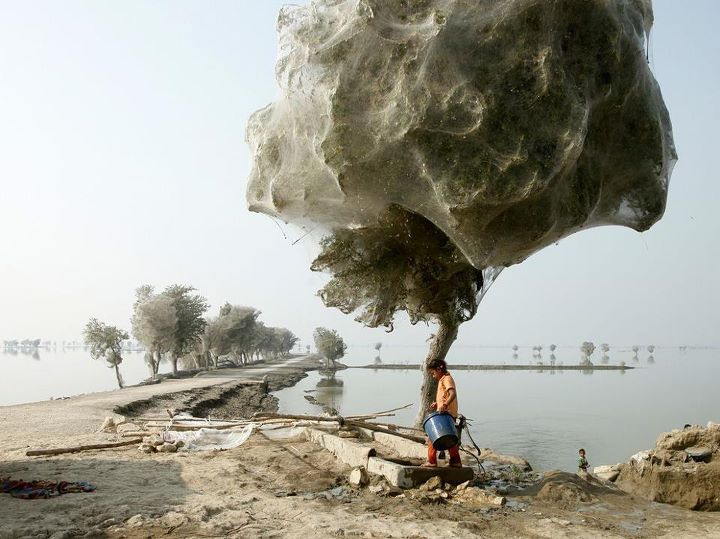