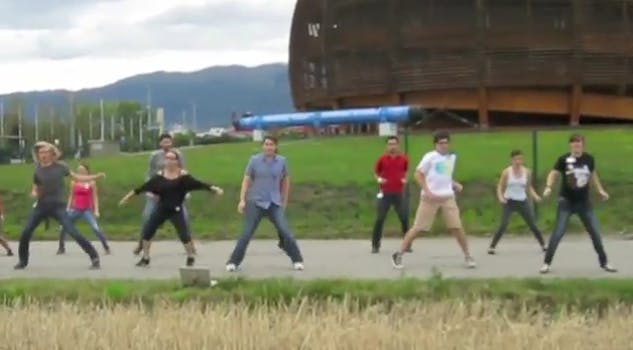 Saturday is National Dance Day, and with the celebration starting to dawn around the globe, the young physicists at CERN, in an effort to prove scientists and engineers can dance, have jumped the gun and uploaded their video a bit early.

CERN, a European research consortium, might be best known on the Internet for birthing the Web 22 years ago. But it also conducts nuclear research and operates the Large Hadron Collider, a physics-testing facility built underground on the Franco-Swiss border.

Back when the LHC was struggling to open on schedule, many feared the collider would create of a black hole that would swallow the Earth, and take the World Wide Web with it, which would make many YouTube viewers sad.

The end of the world hasn’t happened yet, nor have any Earth-threatening black holes, so these physicists have plenty of reasons to get down on National Dance Day.

Nigel Lythgoe, a producer and judge of the TV show “So You Think You Can Dance,” started National Dance Day last year. A YouTube search for 2010 reveals more than 4,000 Dance Day videos, and this year’s attendance looks even higher. (Given its global reach, it’s not clear why the event is labeled “National,” but that’s not stopping anyone.)

On Facebook, more than 20,000 people have RSVPed for this year’s event. Besides the CERN scientists,  others have taken to uploading their dance routines early.

More experienced dancers who wish to get in on the fun should check out the National Dance Day 2011 Master Class routine.