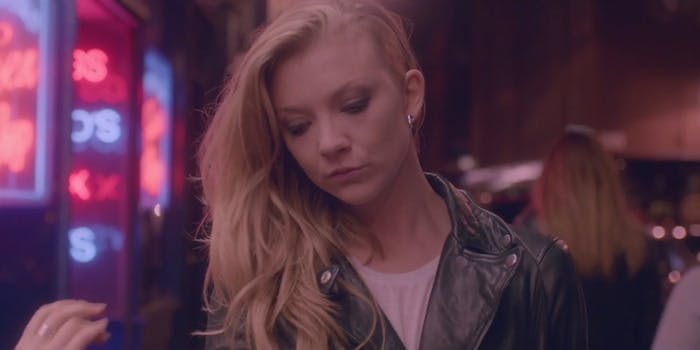 This 'Game of Thrones' beauty has a lot of love to give.

Whether she’s walking the streets of King’s Landing or seducing Henry VIII, one thing’s for sure: Natalie Dormer knows how to charm onscreen. That’s precisely why rock crooner Hozier chose the Game of Thrones beauty to star in the music video for his latest single, “Someone New.”

Directed by Anthony Byrne, the video indulges the fantasy of every hopeless romantic who can’t help but dream about falling in love with the stranger across the bar or finding a soulmate on the subway. In “Someone New,” we see a sultry Dormer silently slide through a night out in the city, going unnoticed as she imagines what it would be like to be a part of every happy couple she comes across.

“It was a joy to be a part of the ‘Someone New’ video, which for me explores the struggle in all our heads between the real and imaginary,” the 33-year-old actress told Entertainment.ie. “It plays with ideas of how loneliness and isolation are two different things and the weight or lightness we can attach to loving another person.”

Had terrific time filming the Someone New video with the fantastic Natalie Dormer. Coming to device near you on Mon pic.twitter.com/8mLYQz3RYe

So the question remains: Will Dormer return the favor and get Hozier a musical gig in the upcoming season of Game of Thrones? We can only hope that the Irish artist will follow in the steps of Sigur Rós and give us a folksy follow-up to “The Rains of Castamere.”