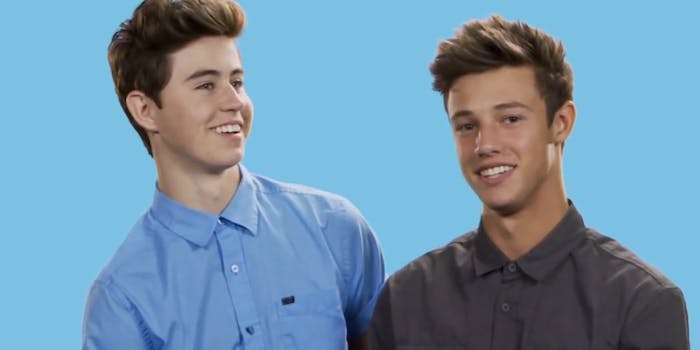 The Vine stars are going longer than six seconds in this new partership.

Vine superstars Cameron Dallas and Nash Grier will be giving more access to their dedicated fans thanks to a new livestreaming partnership with site GANDER.tv.

Dallas and Grier are no strangers to expanding beyond their Vine roots, after signing a film deal with AwesomenessTV in April and branching out beyond six seconds into the YouTube world. The pair, who have almost 15 million Vine followers combined, will each host a regularly scheduled, subscription-based livestream on the video-streaming network, as well as appear together on special occassions. Grier will make an appearance first, with his livestream going live today at 7pm ET.

Fans can subscribe annually for $29.99, or buy a single month of subscription for the introductory price of 99 cents, with monthly subscriptions jumping up to $2.99 in the future. For now a month of Grier is equal to a iTunes download, or an app purchase in the future, but it remains to be seen just how many fanatics will pay a premium for more content when the stars are both still posting on their Vine and YouTube channels for free.