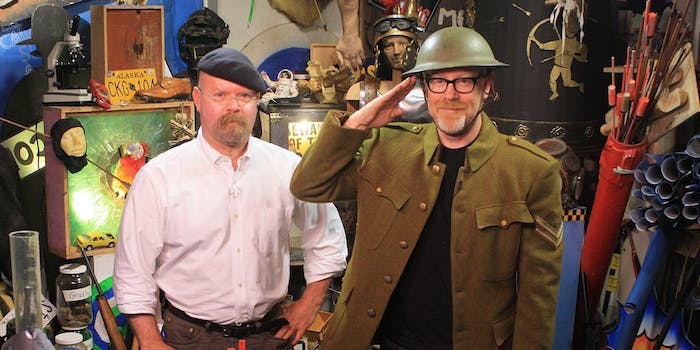 They won't make up for the absence of Jamie’s walrus-stache, but they will keep you entertained and/or informed.

After 15 seasons, several specials, and nearly 300 episodes of outlandish experiments, countless explosions, and invaluable “yay, science!” flag-waving, the Discovery Channel’s hit MythBusters wrapped up its run this past weekend. It’s a real loss in this era of widespread scientific illiteracy and the willful embrace of ignorance; we need Jamie, Adam, and the rest now more than ever. Still, 15 seasons is a long damn run, so we can’t really begrudge them for wanting to move on to whatever is next.

To add insult to injury, however, MythBusters isn’t currently available on Netflix or Amazon, although recent seasons are still available on Hulu. That means these withdrawal pains are gonna be rough, and I’m especially disappointed that MythBusters is bowing out right as my kids are getting old enough to have appreciated it—and benefitted from it. So while I’m careening through the stages of pop-culture grief, we here at the Dot have rounded up a half dozen streaming MythBusters alternatives that won’t make up for the absence of Jamie’s walrus-stache but will keep you entertained and/or informed. Hopefully they’ll go over as well as a lead balloon.

These days, science educator Bill Nye is best known for popping up on the news to debate creationists and climate-change deniers. But for a generation who grew up in the ’90s, Nye will always and forever be the “Science Guy” who introduced them to the wonders of the universe in his long-running PBS kids’ show, aptly titled Bill Nye the Science Guy. The series ran for 100 episodes between 1993 and 1998, becoming a staple of both PBS lineups and classrooms around the world. One of the great things about MythBusters is that it was a show you could watch with the whole family, and Bill Nye occupies a similar space. It’s targeted at younger kids, but Nye is charming and funny, and it’s impossible not to be won over by his infectious enthusiasm about science and learning.

Jason Silva, whom The Atlantic once described as “a Timothy Leary for the Viral Video Age,” hosts this National Geographic series that delves into the mysteries of the human brain: how it works, how it shapes and defines who we are, and how sometimes even the simplest of tricks can deceive it. Silva brings in scientists, doctors, illusionists, and even a UFC fighter at one point, all to explore subjects such as memory, optical illusions, time perception, language, and gender. Netflix has the first four of the six current seasons available for streaming.

Carl Sagan’s original 1980 PBS series Cosmos was an unquestionable pop-culture landmark and a lasting touchstone for many who were inspired by the show to pursue careers in the sciences… or even just gifted with a lasting sense of wonder at our amazing universe. Astrophysicist Neil DeGrasse Tyson was one of the people inspired by both Sagan and Cosmos, and in 2014 he teamed with Family Guy creator Seth MacFarlane and with Sagan’s widow, Ann Druyan, to resurrect Cosmos for a new generation. Like the original series, this new Cosmos has the host taking viewers on a grand tour of reality, from the distant reaches of space to the small, simple moments in which the actions of a few here on Earth helped shape the course of human history. All 13 episodes of Cosmos: A Spacetime Odyssey are available on Netflix Instant.

4) How We Got to Now With Steven Johnson

This British series is hosted by Steven Johnson, a contributor to Wired, the New York Times, and others, as well as author of several books including 2005’s Everything Bad Is Good for You: How Today’s Popular Culture Is Actually Making Us Smarter. (That was obviously written before “Kardashian” was a household name.) Each of How We Got to Now’s six episodes begins with a broad concept—time, glass, sound—and then dives into ways in which that subject has been confronted, explored, and surmounted by humanity over the centuries. One episode explores the ways people have artificially created cold, while another explores the history of artificial lighting and how it fundamentally altered the way we live and work. Just as importantly, it introduces viewers to some of the people who changed the world in these areas, making contributions we take for granted every day. All six episodes of How We Got to Now are available on Netflix Instant.

The MythBusters often acknowledged the pop-culture debt they owe to MacGyver, and they even dedicated an entire 2008 episode to some of the ’80s series’ more outlandish tricks. After all, MacGyver was a character who could think his way out of pretty much anything, often crafting elaborate devices out of the simplest materials. Even though Mac was pure fiction, the joy of watching MacGyver is very similar to the fun of MythBusters… just with a mullet and an extra-thick layer of ’80s cheese. MacGyver ran for seven seasons on ABC between 1985 and 1992, following the adventures of secret agent Angus MacGyver (Richard Dean Anderson), a Vietnam vet with a brilliant knack for getting out of tricky situations using little more than a chewing gum wrapper and a paperclip. It’s silly popcorn entertainment, but it also celebrates science, critical thinking, and a hero who’d rather think than shoot—and that’s no small thing.

The MythBusters tackled plenty of myths involving vehicles over the years, everything from rocket-propelled cars to lead balloons. For those left craving crazy stunts involving one or more wheels, the long-running British series Top Gear is just the ride you need to steer you clear of your MythBusters moping. For 14 years, host Jeremy Clarkson and a revolving door of celebrities have put some of the fanciest rides on the planet through the ringer in a series of races and challenges. It may be the closest most of us ever get to driving these beauties, but thankfully it all makes for one hell of an entertaining ride, even if you aren’t a “car guy/gal.” There’s a reason Top Gear is one of the most popular reality shows on the planet. Netflix Instant currently has the five most recent seasons of the show available for streaming, with each season clocking in at a bite-size six to seven episodes.