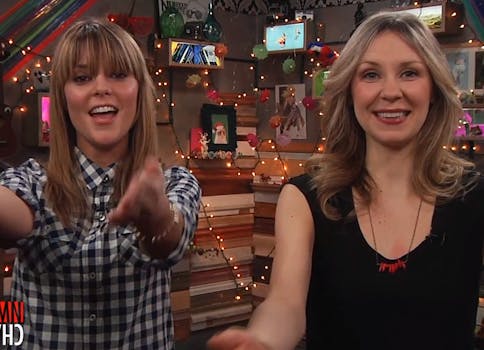 The Internet's funniest damn channel is about to turn into one big old damn network.

The Internet’s funniest damn channel is about to turn into one big old damn network.

Long-running online comedy outlet My Damn Channel announced that it will undergo a major type of expansion Monday morning, one that will bring about the advent of the My Damn Channel Comedy Network, a multi-channel online network designed to facilitate the development of hundreds of new online comedy series.

What’s that mean? Basically, it means that the New York–based MDC will expand beyond the standard programming it currently offers—Daily Grace, My Damn Channel Live, The Bill Murray Show Starring Mark Malkoff, McMayhem, among others—to include a to include a whole slew of acquired content, ranging from small-scale projects to larger programs that feature more prominent stars.

Creators joining the new My Damn Channel Comedy Network will sign a non-exclusive, one-year licensing and distribution agreement to showcase their work on the network’s online distribution avenues—MyDamnChannel.com and the company’s YouTube channels. The company will then split revenue with the creators after MDC handles distribution, promotion, marketing, and social media support for the shows.

Speaking with the Daily Dot earlier this month, My Damn Channel CEO Rob Barnett suggested that this type of network support is becoming increasingly necessary for smaller-scale creators hoping to compete in the changing world of online video entertainment.

“You’ve got to have contracts that give talent the opportunity to fire us easily if they’re not enamored with our ability to do right by them,” he said. “We’ve been working on those contracts again in the last few weeks and doing our best to understand what all is out there and making sure that, as we begin to work on distribution models with some talent, we want to make sure that those contracts are simple, fair, transparent, and competitive, if not better, than the contracts that are out there now with other companies doing it.

“I do think that if you’re a content creator in 2013, this is a time to think seriously about choosing a network like My Damn Channel versus going it alone on places like YouTube. That’s where there’s so much talk right now in the sector about the small number of companies that are offering network-like services for content creators. It’s not enough to make great video now. You’ve got to figure out how to manage your career, and the topic seems very frothy at the moment.”

Few companies are in a position to take on such an expansion as My Damn Channel. The company posted significant growth numbers in 2012, increasing its production by 268 percent and its YouTube subscriber base by 366 percent. Its year-long view totals increased more than 90 percent from the numbers it posted in 2011.

My Damn Channel also announced Monday that it will bring in Blip.tv veteran Eric Mortensen to hold down the newly-created position of director of programming and acquisitions for the company, making him responsible for handling the large influx of opportunities and programming prospects the network will now face. Barnett did not speak to network contract negotiations directly when we spoke earlier this month, but he did allude to the company’s longstanding perspective on programming investments.

“We had a different view of how we wanted to program the work that comes out of My Damn Channel,” Barnett said. “I think that vision will be even more needed in the next couple of years. The amount of content that’s out there now is overwhelming to all of us.

“There are incredibly great reasons to do one-offs, but we have always based the business of the company on some early thinking that I got from my co-founder, who was many things before his days at My Damn Channel, including a venture capitalist. He said that, in a way, we might benefit in the long run from looking at each individual decision to work on a production like a portfolio that a venture capitalist would look at. How much money is going into a project? What do we realistically want to get out? You can’t judge all shows the same, because the shows may have different goals. We did a really great series last year that was great and short and quick and efficiently produced, and we were able to do a lot of episodes of it.”

Photo via My Damn Channel/YouTube