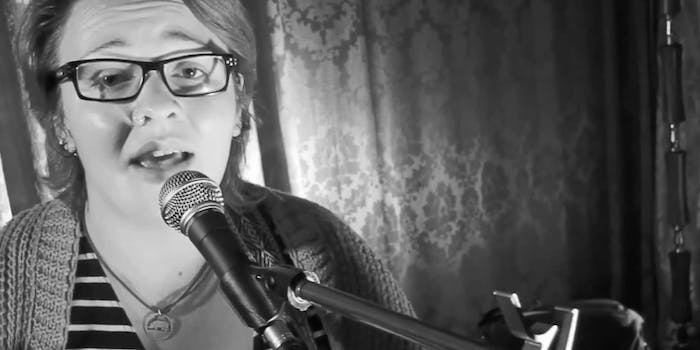 This would-be showgoer could have been on the bill.

Irish singer-songwriter Tara Stacey has penned and recorded a beautiful song about heartbreak, with one notable twist: She never even met the guy who left her in the lurch.

Stacey, it seems, had gone online in search of tickets to Electric Picnic, a massively popular music festival in Ireland, whose bill this year included the Arctic Monkeys, Björk, My Bloody Valentine, and the Knife, among others. An ad posted by one Johnathan McLoughlin—a man allegedly from Killorglin, in Country Kerry—promised just that, for a not-insignificant fee. She had her suspicions about the deal but finally decided she could rely on him, transferring the money into his account and settling in to wait for her ticket to arrive via post.

That ticket, of course, never came, and a few days later Stacey called McLoughlin to followup on their deal. After hearing his gruff reassurances, Stacey was never able to get in touch with McLoughlin again to demand her money back. What McLoughlin clearly didn’t count on, however, was Stacey’s skill as a guitarist and lyricist—talents she would soon turn to her advantage in the matter of revenge.

The resulting song, “Johnathan McLoughlin’s Electric Picnic Scam,” is an ode to the con artists who rely on others’ trusting nature in order to exploit and hurt them. It’s also an incredibly satisfying public shaming. Unless he had a bank account under an alias, we can assume that Johnathan McLoughlin himself is now getting a lot of questions about a piece of pop music that directly slanders him.

“I hope you get this message and you realize what you’ve done,” Stacey soulfully sings in her moving ballad, “because I hate the thought of you thinking that you won.” If he did assume victory at any point, this certainly wasn’t the kind of collateral damage he had in mind. The song lays out the entire incident, repeating his full name and location several times. “Who do you think you are?” she goes on. “If this is the way you behave in life it won’t get you very far.”

“People really shouldn’t be so rubbish to each other,” Stacey explained on YouTube, “and I’d like to remind him of that. I would really appreciate people taking the time to share this video, I want it to make the rounds and eventually get to Johnathan McLoughlin, of Killorglin, Kerry. Thanks to him I have no ticket, and no money to get another one! So curse him and his kind, and may the rest of us take heed.”

Despite her money shortage, Stacey has also made “Johnathan McLoughlin’s Electric Picnic Scam”—a Beatles-esque title, really—available as a free download on Bandcamp, and therefore all the easier to share in the interest of reaching McLoughlin himself. After all, it takes a real scumbag to make someone wish they’d bought through Ticketmaster instead.