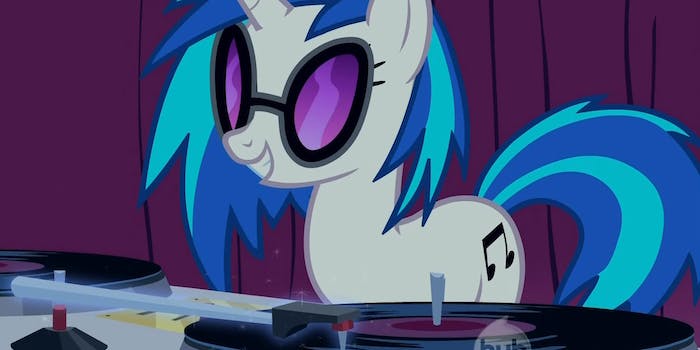 For brony musicians, “Friendship is Magic” serves as muse

My Little Pony: Friendship is Magic has spawned an entire genre of music.

Three young men sit down with their acoustic guitars and begin a countdown. With their shaggy haircuts and skilled strumming, they could pass for an up-and-coming indie band. But if you listen closely, the song has an unusual subject: little ponies.

AcousticBrony is just one of dozens of bands inspired by My Little Pony: Friendship is Magic. Every element of the TV show has inspired devotion from its brony fans, but love for the show’s music has developed into a subculture of its own.

How big is brony music? In the two years since the show went on the air, so much music has been produced that fans have lost count of how much there is. Brony news site Equestria Daily posts dozens of new songs, and sometimes full albums, every day. The MLP Fan Labor wiki lists nearly 50 musicians who have composed brony-related songs—and those are just the “popular” ones. And as the final proof of its legitimacy: it’s been written up by Rolling Stone.

At the end of 2011, EverFree Radio did a top 100 countdown of pony songs taken from all the tunes they could find—which totaled 4,826. Final Draft, one of the 11 bronies who helped found the podcast in October, told the Daily Dot that EverFree Radio streams brony music 24 hours a day:

“Brony musicians reinforce the community by giving it a soundtrack. Fans get passionate about the brony tracks because they reflect the excitement for the show.”

Brony music is truly global. From Bronyfield’s heavy metal medley out of Finland to Living Tombstone’s Hebrew rock anthem, there’s a song for every fan’s location and musical tastes.

“The main thing that jumps out at me about brony music is the ridiculous amounts of talent on display,” said Charlotte Sable, a brony from the Toronto area.

“From remixers, to artists who can make music from chopped clips, to writers of original songs, I could just go on and on and on. And I haven’t even started on the various covers in different styles from a capella to chiptunes. It’s just mind boggling.”

Musicians cover every genre from chiptunes to jazz and funk—and they’ve also expanded on a few existing genres. There’s “Dubtrot,” sometimes known as “Ponystep,” which takes a cue from dubstep’s bass drops.

“Ponybeat” is a brony-specific take on Eurobeat. The term was popularized by Californian Eurobeat Brony. Despite having its own lingo, Eurobeat Brony told the Daily Dot that part of the reason the music community is so large is because it’s so welcoming to new members.

“The musicians themselves are a rather tight-knit but welcoming bunch,” he said.

“Everyone knows how it feels to be starting out making remixes of technicolor horses, so most newcomers are quickly welcomed and find themselves with a wealth of other talent with which to work and compete.”

Bigger than any other genre are remixes and covers of original Friendship is Magic songs. The show’s peppy original songs have inspired an entire site, Equestrian Beats, devoted to spreading and preserving remix culture.

At the center of this fandom is Daniel Ingram, the 36-year-old composer behind the show’s opening theme and many of its original songs. Wisely, he encourages, rather than attacks, fans who riff on his work. Occasionally, he’ll even post favorite fan covers on his Facebook page. When he leaves appreciative comments on fans’ YouTube pages, they tend to get more than a little starstruck by the attention.

“It’s an honor to have people get inspired enough by the work I do to go put their own stamp on it,” Ingram told Equestria Daily. “[O]ne of my favorite activities is going on YouTube and hearing covers of my favorite songs done in new and unexpected ways. We’re just lucky to be in a time when these things can be shared between so many fans.”

Photo from My Little Pony: Friendship is Magic

Editor’s note: FennecusKitsune, a brony fan, provided invaluable information and expertise for this report. We thank him.