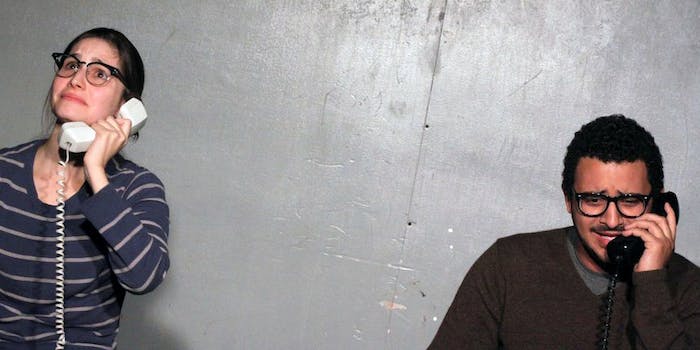 It's a funny murder mystery with a solid ending.

Sketch-comedy duo and fellow Serial junkies Marina Tempelsman and Nicco Aeed feel your pain. And they may have the binge-listening antidote to what ails you.

Their serialized podcast MURDER! will please comedy and cliff-hanger fans alike with its genre-bending plot, which follows a group of goofily named invitees to a mysterious party in a spooky mansion.

Filled with oddball characters, MURDER! effectively straddles the absurd line between humor and horror. Following a clash of thunder in Episode 1, Penny, a party guest and would-be victim, exclaims, “We’re all gonna die here!” Then, realizing that she may have overreacted, she apologizes: “Sorry! I get scared very easily! Old houses, loud noises, interracial couples. Everything seems to scare me!”

Tempelsman and Aeed, who perform in New York City as Marina and Nicco, became obsessed with Serial when it took the podcast world by storm last fall.

“We were both consumed with Serial,” Tempelsman told the Daily Dot.

The show inspired them to do something wildly different from anything they’d ever done before.

“We usually write sketch and shorter comedy things,” said Aeed, “and I think we were interested in … a cliff-hanger story.”

With Serial, Clue, and sketch comedy as their guiding archetypes, the duo—who have been writing together for more than nine years—took on their writing career’s most ambitious project yet: eight half-hour episodes that would be staged over the course of two weeks.

Tempelsman and Aeed borrowed jazz riffs and worked with improvisational musicians to give the show its old-time radio-mystery feel. They knew early on that they would record the live, staged show with a two-fold aim: to honor the audio medium that had inspired them and give audiences an easy way to keep up.

Following daily double-header performances at the People’s Improv Theater in New York City, Tempelsman and Aeed released the episodes on SoundCloud and iTunes.

The complete 8-part series is now available for binge-listening on both platforms and is sure to please listeners who just can’t wait for Serial to return. And the best part of this mystery? It has a concrete ending.

Fans who want to see the show live can catch Tempelsman and Aeed staging an encore performance of MURDER! as a two-day marathon on Jan. 24 and Jan. 31 at the People’s Improv Theater.

Photo via Marina and Nicco