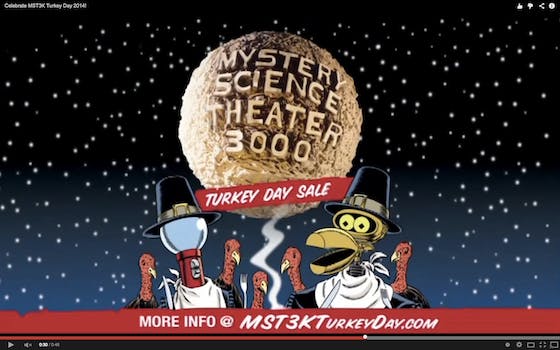 ‘MST3K’ is taking over Turkey Day

The episodes are still up for debate over on Twitter.

Get out the TV trays and prepare to have your bird and fixings in front of your big screen.

Joel Hodgson and the crew from Mystery Science Theatre 3000 will be airing their second annual Turkey Day marathon with six hand-picked episodes and new host segments from the man who once ruled the Satellite of Love. The streaming begins at noon ET on Thanksgiving and will air only on mst3kturkeyday.com and the MST3K YouTube channel.

Thanksgiving has long been close to the Mystery Science heart, and this year’s festival is no different. It’s the second year back after a several-year run on Comedy Central in the early ’90s, but it’s the first time the extravaganza will not air on broadcast or cable TV. Nerdist reports the 12-hour marathon will feature “special guest appearances” which may or may not include others from the MST3K gang like robot sidekicks Tom Servo, Crow T Robot, and Gypsy or human Mike Nelson, who took over for Hodgson as the man in space in 1993.

The six episodes have not been finalized, and fans can make their suggestions by sending a tweet to Joel Hodgson. The 2013 lineup included “Mitchell,” “Space Mutiny,” “I Accuse My Parents,” “Werewolf,” “Cave Dwellers,” and “The Final Sacrifice.”