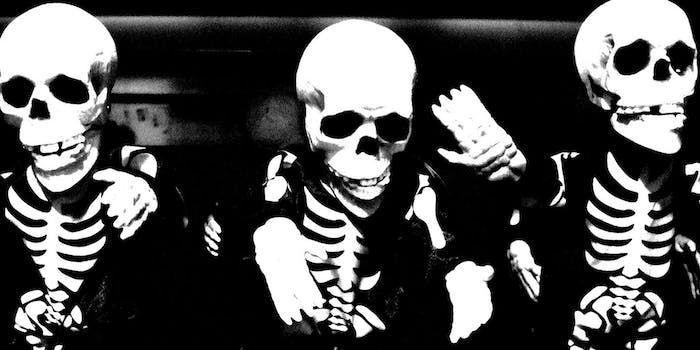 From 'Monster Mash' to 'Ghostbusters.'

As YouTube viewers the globe over fall into the Halloween spirit, the video giant is taking note of some of the content that tends to thrive this time of year. In the same way that Nat King Cole’s “The Christmas Song (Chestnuts Roasting On An Open Fire)” and Mariah Carey’s holiday classic “All I Want For Christmas Is You” see an uptick in viewership in December—and Stevie Wonder’s “I Just Called To Say I Love You” and Savage Garden’s “Truly Madly Deeply” are popular come Valentine’s Day—certain tunes seem tailor made for Halloween.

YouTube pored through its data to determine the 10 tracks that see the highest increase in plays on Oct. 31—as compared to average viewership throughout the rest of the year.

The most popular video on Halloween by a landslide is “Monster Mash”—the 1962 novelty song by Bobby “Boris” Pickett and the Crypt Kickers, which was played on average 41 times more frequently on Halloween in 2013, 2014, and 2015 as opposed to every other day of the year.

Every song on YouTube’s list receives at least 10,000 average daily views, and received at least twice as many views on Halloween. Check out the 10 most popular Halloween music videos below:

1) ‘Monster Mash’ by Bobby ‘Boris’ Pickett and the Crypt Kickers

2) ‘This Is Halloween’ from The Nightmare Before Christmas

5) ‘This Is Halloween’ by Marilyn Manson