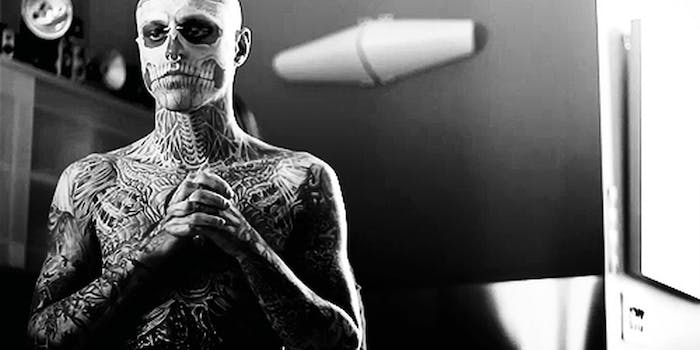 Zombies are certainly having their moment in the sun. Vampires, of course, can’t stand up to the harsh light of day and quickly wilt, while zombification renders one immune to heliophobia or, indeed, fear of any kind whatsoever.

We’re not sure what French Canadian model, circus performer, and found art object Rick Genest is afraid of, but we’re pretty certain the list does not include needles.

His anatomical tattoos paint 80% of his body, including his entire torso, neck, and head, in a fascinating portrait of the components of human life—the kind we can generally only see after the subject is dead. Thus, his whole body is transformed into a work of morbid yet humanitarian art.

Thanks to his discovery last year by Nicola Formichetti of French fashion house Thierry Mugler, Genest has become a high-fashion totem, and he appeared in a Lady Gaga video which backdropped the winter Mugler fashion show. He has toured the world with Lady Gaga and modeled in Paris for Mugler, which was actually the first time he’d ever left Canada.

Genest is also something of a social media phenomenon, with 13,330 likes on Facebook and 66,478 followers on Twitter. His tattoo project, which is ongoing, has reportedly cost Genest $17,000 so far, which is probably still less than Kim Kardashian spends on waxing in a year.

For all these reasons, plus the fact he is simply physically breathtaking to look at, we are featuring Genest as today’s Morning GIF. This image was posted to the Lady Boner Tumblr and has 126 notes; there are other shots of Genest on that blog with more, but this one is our favorite for its eloquent and poignant simplicity.