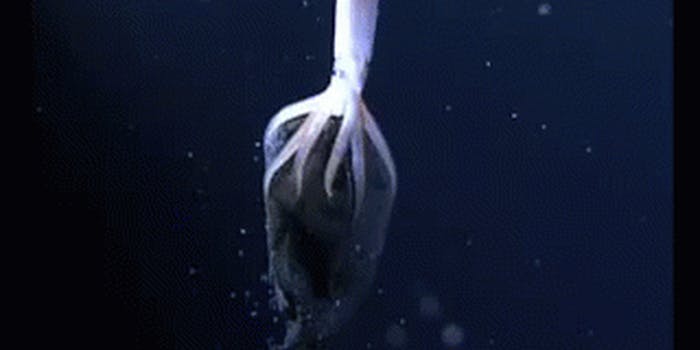 The Morning GIF: Squid and their young

Does this footage prove that squid raise their young rather than letting them fend for themselves?

As science and surveillance progress in their relentless fashion, former frontiers become suburbs, and the universe, once infinite, seems to close in on itself like a Klein bottle. In an ever-shrinking world, there are fewer and fewer sources of mystery and awe. Fewer and fewer, but still some.

This is one of them.

The squid is as common as calamari, yet as elusive as the Kraken. Yesterday’s news that a Japanese expedition had filmed a live Giant Squid (Architeuthis dux) in the wild was greeted with ecstasy by both scientists and civilians, united in wonder at one of the planet’s last living mysteries. However, NHK and the Discovery Channel are no fools: They have released only eight seconds of footage so far, featuring an impressive, yet wounded, specimen missing its two attack tentacles, but not hesitating to go after the camera, showing a truly admirable Cthulian spirit.

Our GIF this morning is similarly cephalopodian, although not so giant, being merely a humble Gonatus onyx. It comes from the second issue of Wholphin, a publication from the McSweeney’s family dedicated to underrepresented DVDs worth another look. The short film Baby Squid, Born Like Stars was meant to substantiate biologist Brad Seibel’s theory that squid brood (i.e., mind) their young rather than simply let them drift off and fend for themselves. As Seibel said on the liner notes, “On the first dive, at 2500 meters depth we came across a squid carrying an egg mass. As we pursued the squid the eggs started hatching.” This GIF is from that moment; the starlike floaters are baby squid swimming under their own power.

Prior to the film, the idea that squid brooded their young had been dismissed as a hopelessly anthropomorphic pipe dream. Afterward, well, judge for yourself.