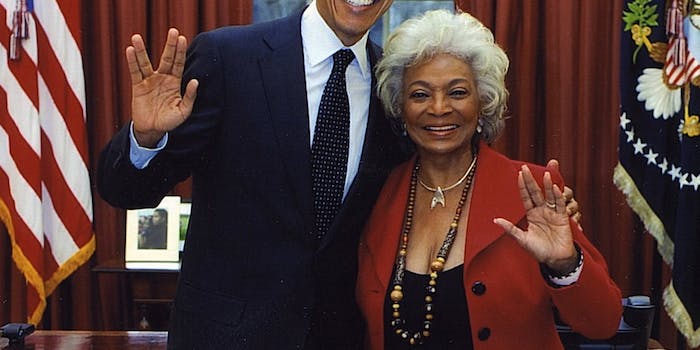 A Tumblr artist has transformed the recent meeting between Star Trek actress Nichelle Nichols and the president into a moving salute.

It’s not quite clear, in the messy entrails of the Internet, just who it was who first pointed out the likeness of President Obama to Mister Spock, fictional second in command of the Federation Star Ship Enterprise. Whoever it was, they were onto something, and soon so was everyone from Salon to Slate.

Late last month, the president welcomed Nichelle Nichols to the Oval Office with a traditional Vulcan salute. Nichols, who played Lt. Uhura on the original Star Trek, has volunteered for many years with NASA, helping with outreach and recruitment, and even went up to orbit in the C-141 Astronomy Observatory.

Naturally, Nichols snapped a Twitpic of the historic moment, George Takei (Sulu) spread the word on Facebook, and some gracious person at the Napsmear Tumblr made a GIF of it for our delectation.