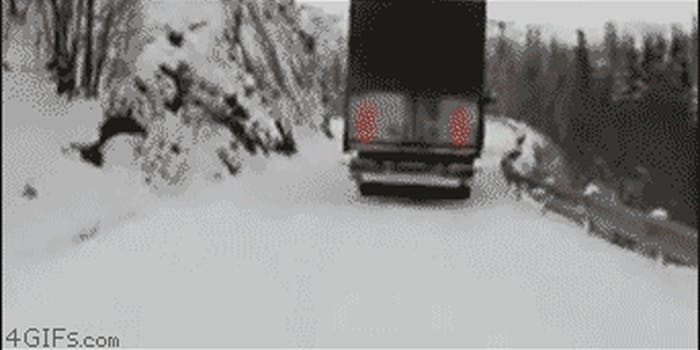 This is what happens when you don't put on snow tires when hauling through Norway in the winter.

Sometimes a GIF captures a moment where fate hangs in the balance. That has never been more literal than in this terrifying lesson in using the proper snow tires.

You’d think that, when driving a heavy truck through Norway in the winter, snow tires would be something of a prerequisite. Apparently, however, you’d be wrong.

This driver, with slick summer tires in place, couldn’t get any farther up the mountains and called for backup at 9:30 am local time. Eventually a tow truck (properly snow tired) arrived and started hauling the truck and trailer over the pass near Leirosen, 700 km (435 miles) north of Oslow, Norway. A hairpin turn, an unfortunate fishtail, and the rest is GIF history.

The tow truck driver, seen leaping from his cab with seconds to spare, escaped without injury. The truck driver, however, plummeted down the mountain and is in the hospital in serious condition with multiple fractures.

On 4gifs.com, this GIF has 40 likes on Facebook thus far. If the social network offered a Do Not Like Option, chances are that would be higher.