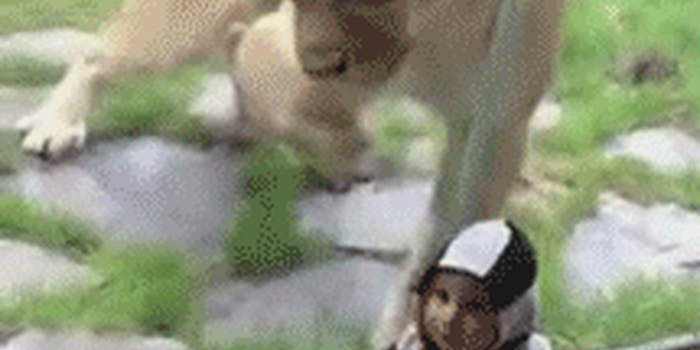 No babies were harmed in the making of this GIF.

This wasn’t your average trip to the zoo.

The proof is in this GIF, taken from a viral YouTube video of an innocent baby being relentlessly, and fruitlessly, attacked by a lioness. Jack the Baby 1; Kya the Lioness 0.

According to the YouTube comments, Jack was always perfectly safe, as he’s on the far side of a thick sheet of DuPont SentryGlas, and his parents are more preoccupied with getting the correct portrait layout than with whether or not their zebra-striped son is inflaming a wild creature to slavering madness with only a half-inch of supercooled technology between them.

At the zoo in Portland, Oregon the usually lazy lioness, Kya, tries desperately to eat my son through the glass. Jack is coincidentally dressed like a baby zebra in his black and white striped hoodie. He is brave though and calls her “kitty kitty”. That’s my boy.

Tumblr user Erin loved the video so much she gave it the GIF treatment, enlarging it significantly to a much more impressive stature. It was quickly picked up by AbsoluteBestGifs and passed around, to the tune of 7800 notes.

It’s true. The Internet is made of cats, the bigger the better.