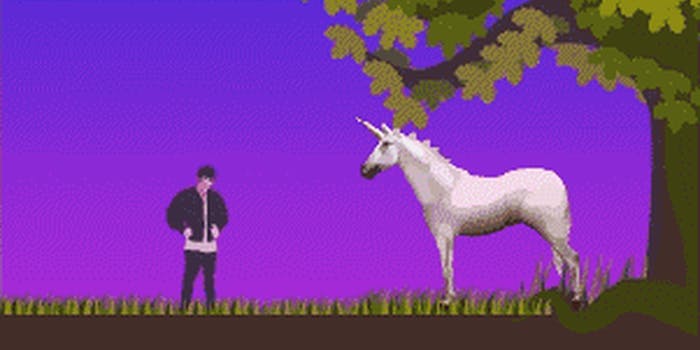 Creator of the world's most difficult game doubles down with a unicorn.

Bennett Foddy may be the most hated man on the internet. Creator of visually unsophisticated first-person games which feature his patented “soul crushing realism,” i.e., You Suck at Everything mode, he’s most infamous for QWOP, the world’s most difficult game.

His latest creation is CLOP, a QWOP-like game featuring ostentatiously medieval language and a first-person unicorn experience. Rumor has it CLOP is a response to a Brony game based on QWOP. The goal of CLOP is to get your sparkly unicorn butt safely over the hill to the virgin hiding on the far side, and, yea verily, it is not easy. It is popular, though; so popular it crashed his site briefly when Reddit caught on. Unfortunately, the best most of these redditors can do is unlock Lame Horse Mode.

One creative gamer on Imgur has developed a winning strategy: winning at least in the sense of being bizarrely charming. Tweeted out by Foddy himself, it’s today’s Morning GIF.