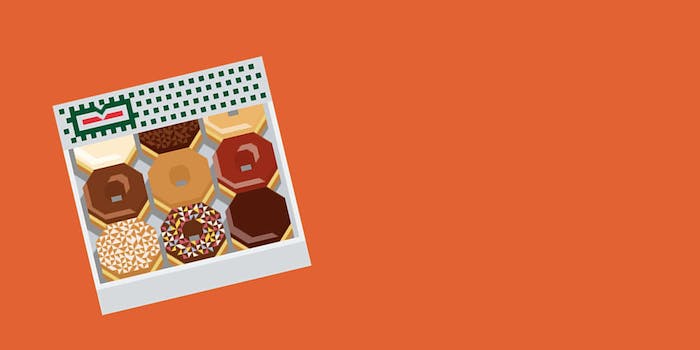 The Morning GIF is “fresh like a box of Krispy Kremes”

The first thing most people do when they hear it’s the death anniversary of artists like Aaliyah or Biggie Smalls is fire up their iPod to play their music. When artist James Curran heard the first anniversary of Beastie Boy Adam “MCA” Yauch’s passing was in May, he wanted to do much more.

So using his illustration skills, the England-based designer created a short video featuring more than 30 pixel animations set to the Beastie Boys classic “3 MC’s and 1 DJ.” Curran exhibited his video in Berlin and London earlier this year and sold prints of each pixel animation to raise money for Macmillan, a cancer support organization.

A Year and a Day from James Curran on Vimeo.

Over the past month, Curran has been posting each pixel animation to Tumblr as GIFs where nearly every one has been highlighted by the GIF tag. His favorite GIF is of a box of donuts which references Mike D’s lyrics “Fresh like a box of Krispy Kremes.”

“This lyric always stood out to me and is one of the band’s most quotable lines, so it was an obvious choice when selecting the three icons for this track,” Curran told the Daily Dot. “It turned out to be one of the more detailed icons in the whole set (of 105 in total), with each individual donut having a recognisable unique flavour. The (almost) pixel art style seemed like a good fit for the project as while I was a big fan of Beastie Boys growing up I was also a big fan of video games, so the two go hand in hand for me.”