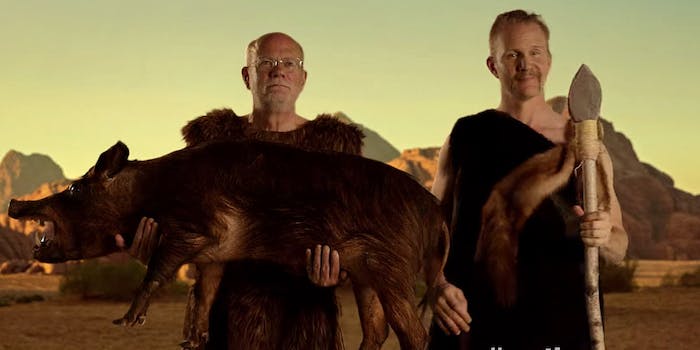 The man who shamed McDonald's is back to demystify economics.

For those of us who slept through Econ 101 in college, this colorful, informative look at why there’s never enough money at the end of the month is a welcome tutorial.

At least, that’s the hope of the producers and directors behind the film series We the Economy. Spearheaded by Paul Allen’s Vulcan Productions and Morgan Spurlock’s Cinelan, this multidimensional digital classroom of 20 short films aims to help us better understand the financial forces that affect our daily lives. What causes a recession? Why do we give so much money in foreign aid? Are Chinese industrialists actually moving their manufacturing plants to the U.S.? There are plenty more economics lessons where those came from: To ensure that no audience is left out, the producers are launching an all-out attack across digital and non-digital platforms.

The process of putting the series together was a producer’s dream, Spurlock told the Daily Dot. “I got to put together a blend of folks that included A-list directors and some of the nation’s most noted economists,” he said. “It was a dream team.”

The project began with Spurlock asking luminaries from the world of economics like Dean Baker,Yoram Bauman, and NPR Planet Money co-host Adam Davidson what were the 20 issues that people most needed to understand about the economic world around them. Those 20 issues were assigned to the 20 filmmakers, who then each teamed up with an advisor to ensure that their cinematic work provided accurate and useful information.

The resulting films, which are each between five and eight minutes in length, feature notable directors like Adam McKay ( Anchorman), Catherine Hardwicke (Twilight), Bob Balaban (Gosford Park), and Morgan Spurlock (Super Size Me). They use varied storytelling approaches ranging from humor to rather mundane talking heads. There’s animation in the form of clever Rainbow Brite camel-like creatures satirically pointing out the issues with workplace inequality (McKay’s The Unbelievably Sweet Alpacas) and an over-the-top JibJab homage in Chris Henchy’s somewhat off-kilter tutorial GDP Smackdown. Unfortunately, in some of the short films that use animation, the message gets lost when the style overtakes the substance.

What is of greatest importance—and perhaps this is the overall mission of the series—is what lessons can be learned from these vignettes. Do these infotainment pieces make us smarter and wiser about how we spend our money and allow us to decipher the daily economic news headlines? In some cases, yes, but mostly they are more ’tainment than info.

If you are looking for a crash course, start with Cave-O-Nomics from Spurlock. As with his previous documentaries like Inside Man and 30 Days, the award-winning filmmaker is a keen auteur who has the ability to interject a laugh or two into his narrative without burying the point. In explaining how marketplace economics work, Spurlock begins with cavemen trading pelts for spears and takes us to modern times—all in a matter of minutes. It works.

Another standout documentary, one that demolishes the common belief that the U.S. is an outsourcing-only nation, is Miao Wang’s Made by China in the U.S. This insightful gem shows how South Carolina’s textile manufacturing business is being revitalized thanks to overseas investment.

Rounding out the list of must-see digital economic lessons is Mary Harron’s This Won’t Hurt a Bit, a funny/not-so-funny view of the U.S. healthcare system. With the midterm elections less than a month away, the short film is a good primer on what healthcare questions to ask our lawmakers as they finish up their campaigns.

The distribution of the film series is so widespread that it will be difficult to miss. Included among the content and carrier partners areAmazon Instant Video, AOL On Network, CBS News, CinemaNow, The Scene powered by Conde Nast Entertainment, Crackle, Dailymotion, Facebook, Fandor, Funny or Die, CNBC, Comcast’s Xfinity TV, Cox, iN DEMAND, Pivot TV, Suddenlink, Time Warner Cable, and Verizon FiOS.

Spurlock said that the long list of distribution partners—55 in all—marks a record for the number of outlets participating in a digital film showcase and speaks to the need to engage in conversations on topics of great societal importance.

“We are economically illiterate,” noted Spurlock. “When I sit down and read the Wall Street Journal, my eyes glaze over. The aim with We the Economy is to target all of us.”

Spurlock said that relying on people who are gifted writers and directors is the winning formula to meet that goal. “If you empower brilliant people to be brilliant,” he said, “you won’t be disappointed.”

Screengrab via We The Economy/YouTube