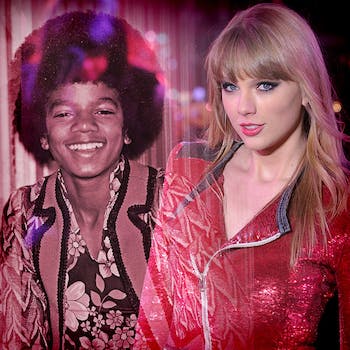 The ebony and the ivory, together at last.

Ebony. Ivory. Surely Paul McCartney and Stevie Wonder were gifted with the second sight, foretelling as they did all the way back in ’82 the someday existence of this newly launched piebald classic.

On the one hand, you have the Jackson 5, ebony’s answer to The Osmonds, performing their 1969 hit “I Want You Back” with little Michael taking lead vocals, long before decadence, lawsuits, and plastic surgery.

On the other, you have tall drink of mayonnaise Taylor Swift giving her all to “We Are Never Getting Back Together,” a massive hit in which she sounds exactly like a Lisa Frank Trapper Keeper that grew up to become a rapper in suburban Orlando. Sooner or later this song will apply to every man in America.

Put the Jacksons’ groove-funk instrumental track to Swift’s schoolgirl warbling, and what you get is the off-whitest black-and-white mashup you’ll ever hear. It is sweet, though, in the way that amateurish mugs made in crafts class are sweet.

Todays mashup was created by digital artiste Chambaland, known in his civilian life as Dan Chamberlain, standup comedian and podcaster. You can download his first two albums for free from his Tumblr.

Now, pour yourself a cup of decaf, spread a slice of Wonderbread with marshmallow fluff, press play, and go to your “happy yoga place.”