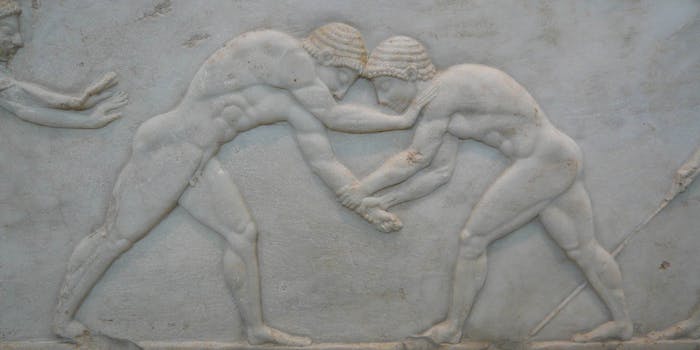 A disagreement turned ugly on a model's site yesterday.

Once upon a time, a starry-eyed hopeful met a man with long lens and a big portfolio, and it was bromance at first sight.

That was three months ago. Now it’s a model vs. photographer battle to the bottom of the Internet.

If you, a prospective ogler, were to have swung by the site of the following doe-eyed brunet model yesterday, you’d have seen something amazing. Something appalling. Something so horribly, unspeakably, jaw-droppingly, eye-gogglingly awful that it was, in fact, wonderful. And NSFW! 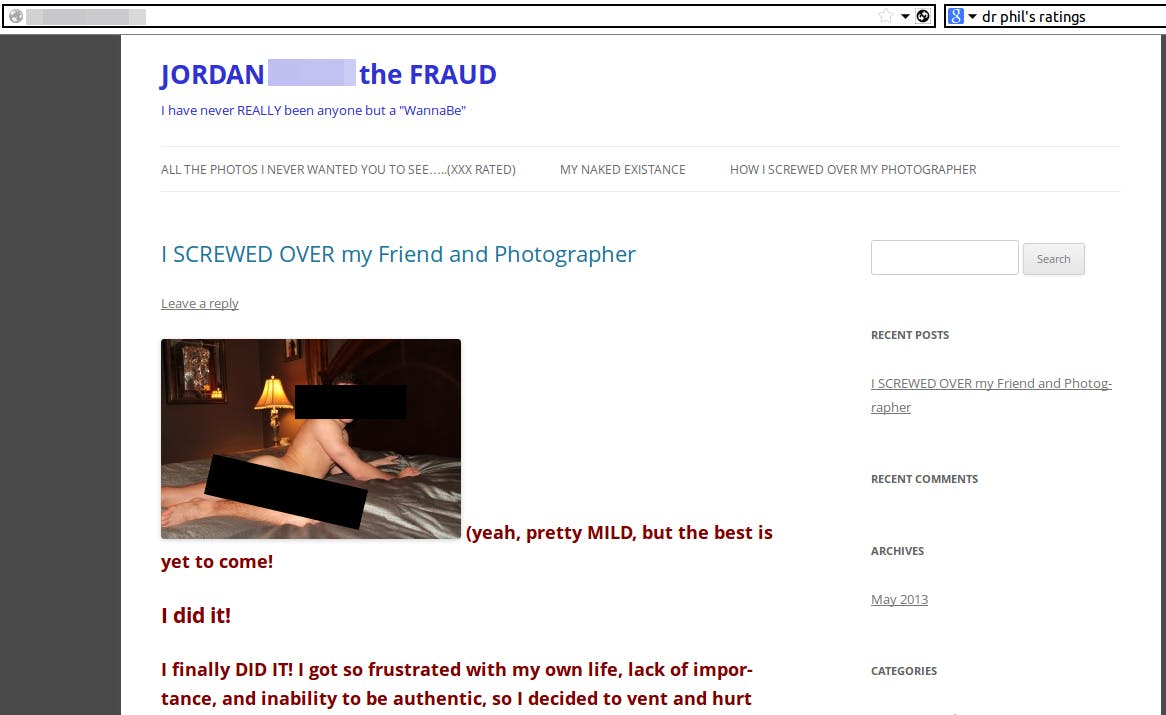 “I finally DID IT! I got so frustrated with my own life, lack of importance, and inability to be authentic, so I decided to vent and hurt someone who was REALLY good to me. My Photag (that is the industry word for “Professional Photographer”, just so you know). He did over 3600 pictures for me, and NEVER once charged me a dime. He believed in me, my ability, my career aspirations, and shared the dream I had. But boy did I screw him over!”

The site, adorned with bed-lolling nude shots of the model, went on to claim (in multicolored fonts of refreshingly variable heights and sizes, though all in BOLD, as you can well imagine) that the model had slandered his beneficent photog(tag?) on Facebook, claiming the shutterbug had scarpered with his tax refund.

“I went on Facebook and blatantly lied about him. Told everyone I know that he STOLE my IRS Tax Refund from me, even though I have failed to simply call the IRS and inquire about the status of my return. … I just chose to be a small, mean, insignificant man, and lash out at SOMEONE. What I failed to do was tell the WHOLE story….so, I am dedicating this site to COMING CLEAN, and EXPOSING MYSELF to the world for who I REALLY am….nothing is off limits.”

A now-poignant Google cache of the site includes a forum entry in which the model lauds his friend and photographer Jarrett Simonds. “My photographer is a great guy located here in the Brentwood area, Jarrett Simonds. He provides knowledge, that not only have I been looking for in a friend but as well as a partner.” That, however, was yesterday.

A quick perusal of the model’s Facebook fan page shows our protagonist dutifully pointing people to his website from Feb. 21. Back then it wasn’t very content-rich, and in fact the thumbnail of the site on Facebook clearly says “Copyright Jarrett Simonds.” He also uploaded 20 photos of himself with the notation they were copyright Jarrett Simonds, along with several other galleries of photos credited to different photographers. A quick Google search for Simonds reveals he’s a photographer from the same area of Tennessee as the model. On a hunch, a quick LinkedIn search turned up a computer tech also from Brentwood, Tenn., by that name, using the same photo as Simonds does on his Facebook page, and listing a past as a Ford model.  A peek at his portfolio reveals a someone who looks like the model, or it did until Bluehost, the site host, suspended it for unspecified reasons Tuesday.

Incidentally, both sites appear to be subsidiaries of TechnologyThatWorksToday.com, which, as of yesterday, no longer works. Whoever set it up thought ahead and purchased some privacy protection, so his name doesn’t turn up in a WhoIs search. Still, it’s not the world’s farthest stretch to imagine who owns that URL, and set up both websites.

Editor’s note: After considering the potential negative, unintended consequences on the subject of this story, his name and links to his website have been removed. The screengrab used to illustrate the story has also been censored.