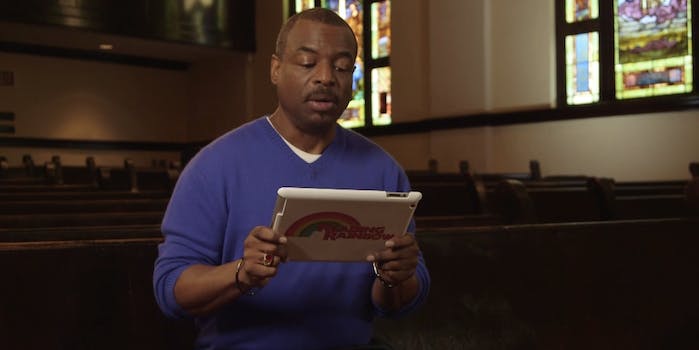 Today is "more than just a day off from school."

In May 2014, LeVar Burton raised over $5 million to bring the beloved Reading Rainbow TV show to the Internet. Recently, the series’ host used some of those funds to share the story of one of the United States’ greatest leaders. Burton released a video on January 14, 2015, where he reads a book about the life of Martin Luther King, Jr.

Burton starts his video tribute to the famed civil rights advocate in a children’s playground, explaining how only a few decades ago kids of different color and race weren’t allowed to play together. The ex-Star Trek actor notes how that mindset was slowly changed in America much in thanks to King’s efforts. Burton then takes viewers to Friendship Baptist Church in Pasadena, California, (where King used to speak) and reads A Picture Book of Martin Luther King, Jr., written by David A. Adler and illustrated by Robert Casilla.

At the end of the story, Burton requests his viewers don’t think of Martin Luther King, Jr. Day as “more than just a day off from school.” Instead, he wants the online video masses to mimic the peaceful actions of King which brought about revolutionary change in America.

“On King Day, remind yourself that you can make a difference in this world by treating others the way you yourself would want to be treated,” he says. “Make that dream your reality today.”