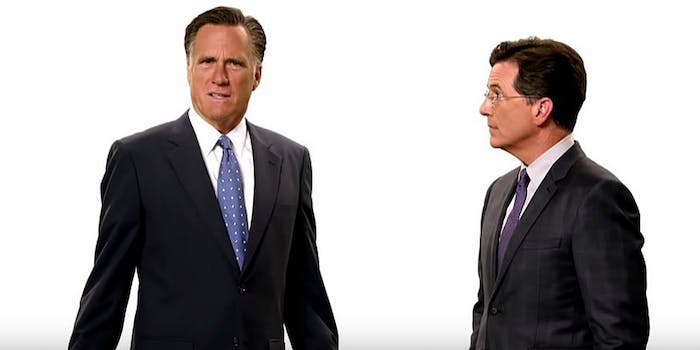 How do you tempt a rich former presidential candidate? You offer him pancakes of course.

Stephen Colbert is less than a month away from taking over as host of The Late Show, and he’s already booking big-time guests. Like 2012 presidential runner-up Mitt Romney.

Let’s go to the video below to see what Romney, the real conservative, has to say to the guy who played the fake conservative pundit-cum-buffoon to perfection.

As we’ve seen in the past, Romney loves pancakes, so it’s no surprise that Colbert’s breakfast temptation would be enough to lure Romney into the studio to shoot the promo.

Either way, it was big of Romney to hobnob with Colbert, especially since in 2012 Colbert’s Super PAC—Building a Better Tomorrow, Tomorrow—thrashed Romney in this South Carolina attack ad, likening him to a serial killer.

Apparently all that acrimony is behind the pancake buddies for now.

Colbert also released two other promos for his Sept. 8. debut including one in which he tries out his trusty new backpack and Charlie Rose trapper keeper, and one in which he fools you with a card trick.