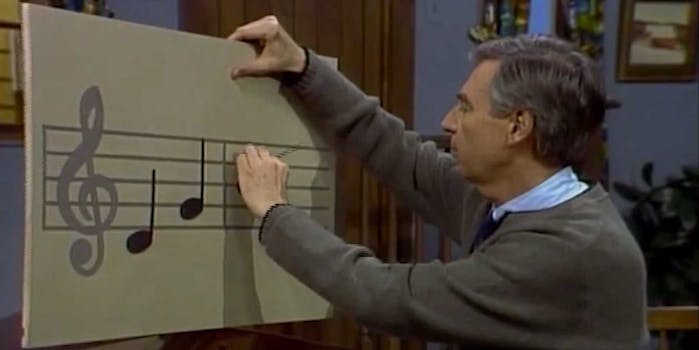 Mister Rogers just wants everyone to sing together.

Luckily for America’s favorite neighbor, Symphony of Science mastermind John Boswell has turned that into a reality by once again turning Rogers into a catchy, autotuned lyricist.

Boswell’s been working with PBS Digital Studios for the past year, making popular PBS figures such as Bob Ross, LeVar Burton, and Julia Child into unlikely music stars. Rogers, whose original songs have convinced congress to fund PBS and made even the most cynical comedians cry, starred in Boswell’s first PBS remix—it now has over 8 million views.

That first video told children that they can grow ideas in the garden of their minds. The new one focuses on one of Rogers’ many loves: song.

We may remember his words of wisdom, but Mister Rogers was also whimsical. He often sang to the camera with the many guests on his show over the years, and more often than not, he “just felt like dancing.”

He also played a lot of instruments over the years—from his piano to a giant drum—and his famous puppets even shared in the musical spirit. But after we’ve enjoyed a bit of song and dance, it’s also good to quietly reflect on the music we just listened to.

Here’s a moment for you, Mister Rogers.