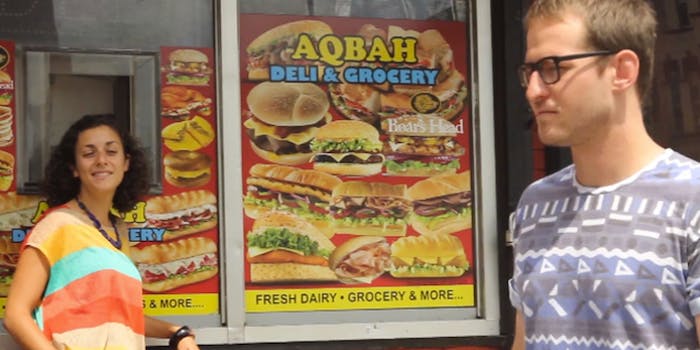 Harassment doesn't end when the sidewalk does.

Shanthony Exum, also known as Brooklyn emcee Miss Eaves, is tired of catcalling. She’s fed up with street harassment. And she’s got a song about it.

She wrote “Aye Girl” back in February, as a way to express her frustration with harassment on the street and off. She penned it a capella, and her friend and producer P. Kilmure eventually came up with the beat. The video, released last week, reverses the gender dynamic, and shows women whistling, eyeing, and catcalling a man as he walks down the street. The song’s also about fending off sexual advances in the club; Exum notes harassment doesn’t end when the sidewalk does.

Though the song was written way before Hollaback’s 10 Hours of Walking in NYC as a Woman video went viral, Exum says the video was a response to the conversation that happened around it.

“I think one of the good things that came out of that video was it did get people talking about street harassment,” she said. “There was a lot of discussion happening before that, but it was really in the collective public consciousness at that moment.

“‘I just want people to start thinking about it critically, and men and women to challenge it, and men to stand up to other men and say, ‘Hey, this is not OK.’”

She adds that the #dudesgreetingdudes hashtag was one way that conversation flipped, but there’s still the bigger issue of how to call out and eradicate this problem. So what does she hope men and women take away from the video?

“I wanted it to be a human rights issue,” she said. “It’s not just that women are being too sensitive. No one’s going to like unwanted sexual advances, and I wanted that to be the point of the video. You shouldn’t treat any human that way.”