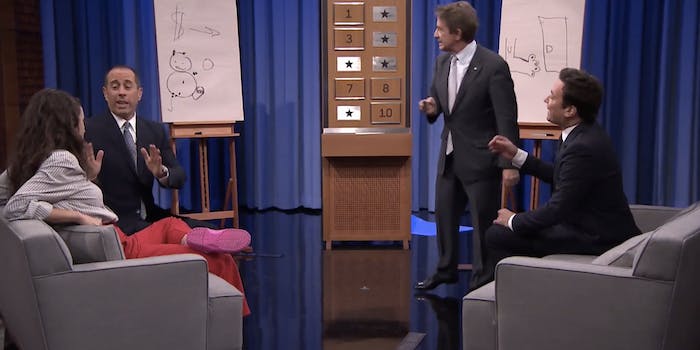 Miranda Sings and Jerry Seinfeld are the worst Pictionary team ever

Jerry Seinfeld and YouTuber Miranda Sings took their awkward interactions from their recent Comedians in Cars Getting Coffee episode to live television. The two appeared on The Tonight Show Starring Jimmy Fallon and attempted to play Pictionary.

Colleen Ballinger (who boasts over 4.3 million subscribers across three channels) appears on the show as her more-than-slightly-obnoxious, stand-offish character Miranda. She manages to insult Fallon right off the bat, insisting she’s played Pictionary before because “it’s the easiest game ever.” Flustered, Fallon assigns Miranda to Seinfeld’s team (probably because he doesn’t want to play with her).

Unfortunately, Miranda and Seinfeld don’t seem to have improved their communication skills since they filmed their installment of  Comedians in Cars Getting Coffee. In the first round, Miranda “draws” mistletoe so slowly that Seinfeld tells her to hurry up. She shrieks, “Stop yelling at me! It’s too much pressure!” When Seinfeld’s turn comes around, he tries to draw the phrase “a foot in the door,” which Miranda just sees as a chicken and a box.

Fortunately for Seinfeld and Sings, Fallon and his teammate Martin Short don’t have great communication skills, either, and both teams end up tying the game with zero points apiece. Maybe in the future Fallon (who’s no stranger to YouTube himself) can team up with Miranda and the two can be as awkward as they want to be.

Sings is the latest in an ever-growing list of YouTube personalities to appear on late night television. Freddie Wong, for instance, recently got into a fight with Jimmy Kimmel and has had at least a couple of stints on Conan O’Brien‘s couch, while Grace Helbig may be getting a late night talk show of her own.