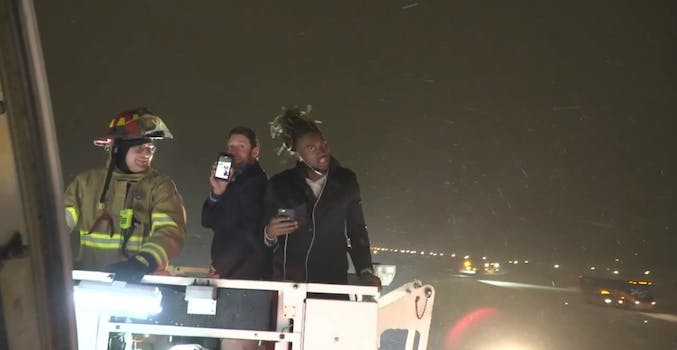 The Minnesota Vikings team plane slid off a runway, and the players live-tweeted the aftermath

Another victory for social media.

The Minnesota Vikings play the Green Bay Packers on Saturday at noon CT. But don’t blame the Vikings if they’re a little sleepy once they take the field.

That’s because the team’s airplane slid off the runway Friday night in Appleton, Wisconsin, leading to a long delay as the team and all its officials slowly deplaned.

As ESPN noted, the landing was safe, but as the plane taxied to the gate, it slid off the snowy runway. Since the plane was situated about 200 yards from the terminal, portable stairs and the bridges used for boarding were unavailable.

That meant the team had to be rescued by the fire department two by two.

Thankfully, there were no injuries, and luckily, those on the plane live-tweeted the somewhat-harrowing experience.

The @Vikings plane is stuck on the runway and safety @JayronKearse8 is using this time to do some team bonding. #MINvsGB #SKOL pic.twitter.com/03NDJtsZj7

After 4 hours, the @Vikings' @ceeflashpee84 is officially off the plane!

And he's still all smiles. pic.twitter.com/QQVJDqRM6Z

Slowly but surely down on the 🚒 #Skol pic.twitter.com/3vWZN3YzeT

The Vikings left their team headquarters at 1:30pm in preparation for their 48-minute flight to Appleton. By 9pm, the team was still deplaning and didn’t leave for the team hotel until about 10:15. That’s less than 14 hours before kickoff.

But the plane was filled with professionals who understand how to overcome adversity.

We have run out of toilet paper so, of course, are using Packers media guides to handle business. #VikingsTrapped