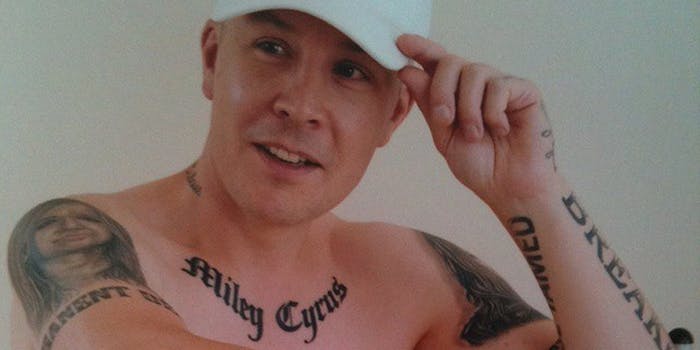 Once upon there was a 42-year-old man named Carl McCoid. His wife had just divorced him, but he still had something better than matrimony: his obsession with Miley Cyrus.

To show his admiration for the singer McCoid christened one of his daughters “Miley,” which certainly won’t be awkward for her once she hits puberty. But following his divorce McCoid went even further, promptly emblazoning himself with 29 different Cyrus tattoos (including three full portraits). The art cost him nearly $5,000, but he may have ultimately paid an even bigger price—his dignity.

McCoid has always taken great pride in his tattoos, and the media attention they’ve received, as evidenced by his Instagram and Twitter accounts. Take a look.

But the Cyrus party may be over: It turns out that 22-year-old singers don’t always like it when fans twice their age tattoo pictures of them onto their body. In Cyrus’s case, she dropped a bombshell for poor Carl in 2013, when she mentioned his tattoos in a radio interview she did in London. According to the Daily Mail at the time, McCoid thought she probably didn’t like the portraits because they still showed her with long hair, circa Hannah Montana, shortly after she’d gone for her infamous buzz cut. But now he’s apparently decided he’s going to painstakingly remove each of his expensive tats, one by one. He told the Daily Mail that he wanted to remove them because he liked her new style less than her old one, and because he really wanted to find a new girlfriend, and it’s kind of hard when you’re wearing a pop star.

The fact that she reportedly blocked him on Twitter probably also had something to do with it.

However, on social media McCoid has been celebrating the tattoos and the many fans who tweet him in support for his keeping them.

He also seems to be planning something new involving the tattoos.

Whatever his plans, he’s raking in the attention in true Miley style.

Maybe it’s time to step away from the celebrity obsessions for a while, Carl.