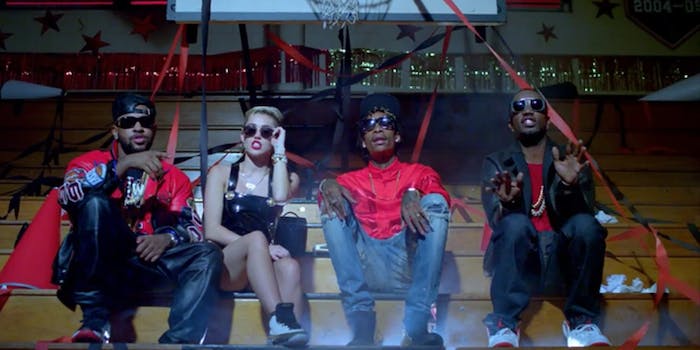 Miley Cyrus is not pregnant with Juicy J’s child

With the media’s singular focus on Miley Cyrus, it was only a matter of time before a pregnancy rumor started making the rounds. Sunday night and Monday morning, Cyrus was trending on Twitter. Why? She’s pregnant.

That is, if you believed a post on CreamBMP, which announced the “breaking” news last night. The site claimed Cyrus shared her pregnancy news onstage at Sunday’s BET Hip-Hop Awards in Atlanta, and that rapper Juicy J was the father. They even included a photo of the two. Further, Cyrus’s father, Billy Ray, was also in attendance, and was quoted as saying, “She really broke my achy breaky heart,” in response to the news.

Sounds too good to be true, right? This was passed around as truth for a few hours, even though, upon closer inspection, Cyrus was not at the BET Hip-Hop Awards. The photo accompanying CreamBMP’s story is from a Vibe article earlier in the summer. Also, no other attendees tweeted about this earth-shattering announcement.

To top it all off, CreamBMP is a satire site, and a simple scroll through the rest of their stories could confirm that. (Another article from the weekend: “Drake nominated ‘most likely to save a stripper’ at 2013 BET Hip-Hop Awards.”) But that didn’t stop gossip blogs from circulating the rumor in an effort to drum up more pageviews. This is the cycle of celebrity news, where all the headlines come with question marks.

Cyrus had some fun with the news this morning, however.

Me: “did you know I’m pregnant with @therealjuicyj baby this morning” @CheyneThomas : “what are you gonna name it?” Me: “Juicy J Jr DUH”

If anything, this is great press for Mike Will Made It’s new single, “23,” which features Cyrus and Juicy J, as well as her upcomng album, Bangerz.