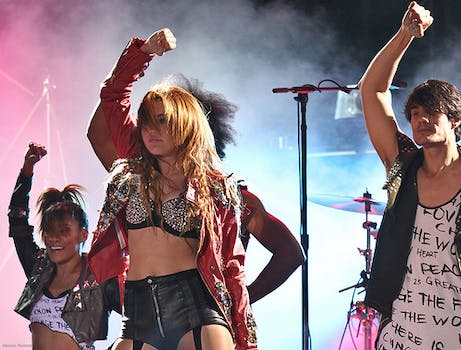 You apparently don't have to be one of the 99 percent to create an anthem for their movement.

It doesn’t take long for a social or political movement to find its theme song, whether it wants it or not. For the Tea Party it was Krista Branch’s “I Am American” in the summer of 2010.

Now the Occupy Wall Street movement has “It’s a Liberty Walk” by none other than teen pop star Miley Cyrus.

“It’s a Liberty Walk” was posted on YouTube last Wednesday and since then has gained more than 300,000 views. The video is less than three minutes long and features images of protesters and police clashing at Occupy Wall Street events across the county and around the world. The video’s description reads: “This is Dedicated to the thousands of people who are standing up for what they believe in.”

The video appeared to be well received on YouTube, with those who ‘liked’ it, far out numbering those who didn’t. Many of the comments were also positive and thankful to Cyrus for producing the song, even if it falls short of the classic protest songs of the 1960s.

“Miley Cyrus is my hero today,”  wrote TheMcAlisterShow. “To be a teen pop star, who is expected to stay safe and palatable and be a puppet of consumerism, and to be willing to not only attach your name to the #occupy movement, but to post a video showing images of police brutality, is really fucking gutsy and admirable. Cyrus recognizes that she has a platform that she can use to reach a lot of politically uninvolved people, and she is using that platform.”

Others were critical of that view: “But would she ever go back to the bottom 90%, hell no,” responded Topher1662. “It’s just bullshit support to promote herself back into the spotlight.”

Of course others looked past the political messages of the video and talked about the music. The general consensus of those people? “It’s a Liberty Walk” wouldn’t be climbing the charts anytime soon. “Autotune much?” asked shyguy1684.