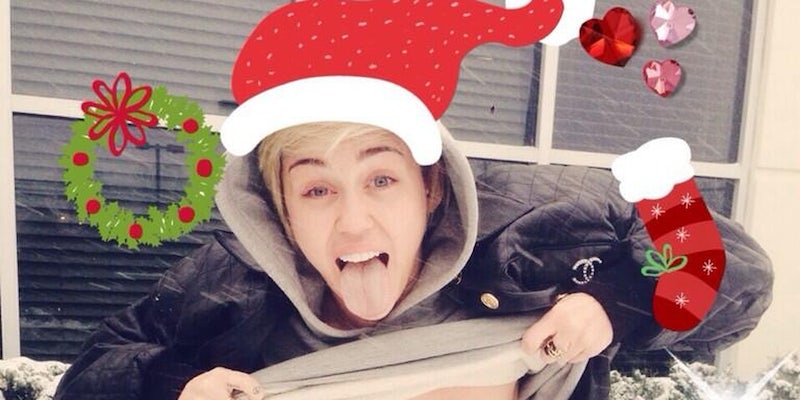 There’s a reason Miley Cyrus is flashing you, and it’ll make you hate the MPAA

The Free the Nipple campaign found the perfect celebrity spokesperson.

This just in: Miley Cyrus has come out in support of nipples.

And it’s actually for a really good cause. She posted a selfie on her Twitter account holding what can only be described as a boobie monocle in support of Free the Nipple, an indie film that challenges the disparity in U.S. media censorship when it comes to violence versus the naked female form.

A trailer for the film asks, “What is more obscene, violence or a nipple?”

Miley, having been known to flaunt her unclothed form now and again, lent her support to efforts to release the film, bringing it to the attention of her nearly 16 million Twitter followers.

Merry Christmas ❤️❤️ THANK YOU NY for being one of the few states to @freethenipple pic.twitter.com/ouXhlBrXVW

The film itself is finished but in limbo while filmmaker Lina Esco looks for ways to get it to general audiences. She launched a Fund Anything campaign to create a direct distribution path after the MPAA, apparently missing the point, tried to give Free the Nipple an NC-17 rating, essentially a “kiss of death” when it comes to traditional means of release.

“To bypass the MPAA’s rating system, I’ve teamed up with a crowdfunding company as a next-level marketing and distribution platform to reach the audience directly,” Esco wrote in a column on the Huffington Post. “I want people to see the film I intended to make not some Puritanical version that the MPAA feels is appropriate for American audiences. It’s hard enough getting a film made in this world, without being censored in a country that ironically prides itself on freedom.”

She goes on to point out her censorship problems aren’t just from the Hollywood censorship machine. Even Facebook removed photos she posted of the film production because they contained (gasp) boobies.

Fortunately, Esco will have a lot more luck bringing attention to sexist censorship practices now that she’s got Miley’s ladyparts on her side.